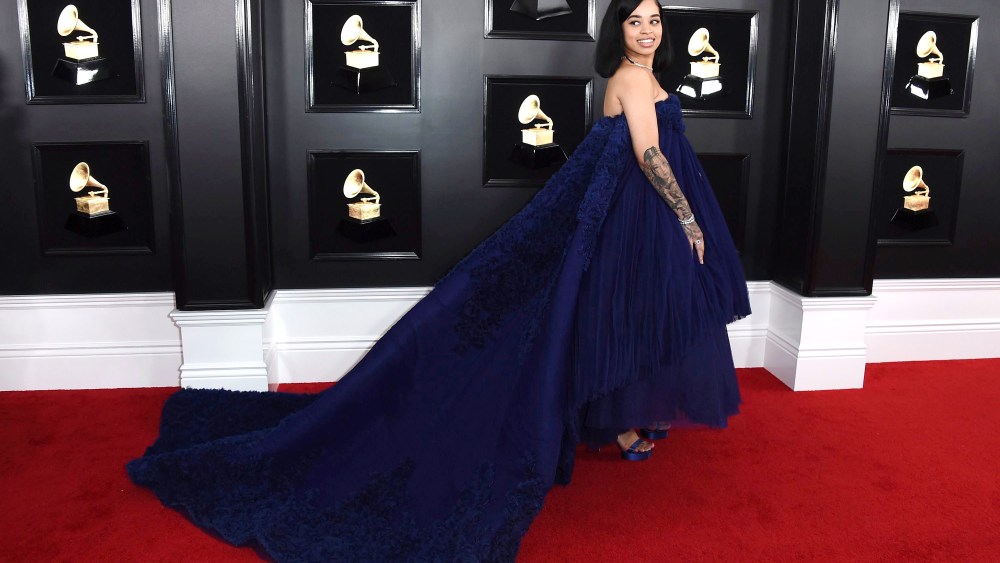 Although their names had not yet been set in gold, stars were setting trends in stone as they descended down the red carpet of the 61st annual Grammy Awards in Los Angeles.

Among those to forge a sparkly path were Lady Gaga, Toni Braxton, Jennifer Lopez, Post Malone and five-time nominee H.E.R., who arrived in a Coach sequin suit paired with her signature black aviator shades that veil her identity. While the artist lingered until moments before the show began, glittery counterparts including Brandi Carlile had a quicker step, inevitably catching the lights with their ensembles.

“I just love flamboyance,” Carlile said in a rush commenting on her Libertine suit. “I’m a long time fan of Elton John. His ability to mix humor with flamboyance and style is something that has always inspired me.”

Going for looks that evoked more drama was sister act Chloe x Halle, dressed in sculptural black-and-white pleats, Ella Mai, who wore a blue dress embellished with ruffled rosettes, and Katy Perry who noted of her pink Balmain gown with bulbous ruffled skirt, “It’s fun and I can move in it” before following with a dance to demonstrate.

Aside from fashion, the topic of diversity was top of mind thanks to the Grammys’ efforts to increase inclusivity: evident in a recent panel titled “Moving the Needle: A Celebration of Women in Music” at USC’s Wallis Annenberg Hall as well as the expansion of the number of nominees for the categories: Best Album, New Artist, Record Of The Year and Song Of The Year.

Of his personal experience as a country artist, Kane Brown who arrived in Versace noted, “I look way different than everybody else. I’ve talked to the people who don’t feel like they belong in country [music]; they’re in the back of the crowds. So we’re just trying to change it. It was scary at first. I never actually fit in where I grew up. So I had already lived it, God was preparing me for this. I feel like we’re doing it pretty well.”

Making waves as a saxophonist, with a nomination for Best Jazz Instrumental Album, Tia Fuller spoke of her experience in the genre as a woman on the heels of the #MeToo and #TimesUp movements.

“There is sexism in Jazz,” she said. “I’ve dealt with it in my career. The patriarchal perspective is so embedded in the culture. To be a woman, a woman of color, and the second woman considered in my category, I feel like we’re making strides in music as to what the landscape in music and Jazz looks like. Even though we’ve always been there, we haven’t been given the opportunities and platforms to really stand and to be heard. This award is going to create other opportunities for women because we’re out there. It’s raising the level of conscious as what this music is supposed to be and reflect culturally, historically, and socially.”

Looking ahead to their performance was the electronic pair Sofi Tukker.

“It’s going to be a party vibe and we also have an incredible live band behind us,” said Sophie Hawley-Weld.

Tucker Halpern echoed, “They’re the best musicians in the world and we get to play our song with them. We did a rehearsal yesterday and it was so much fun.”