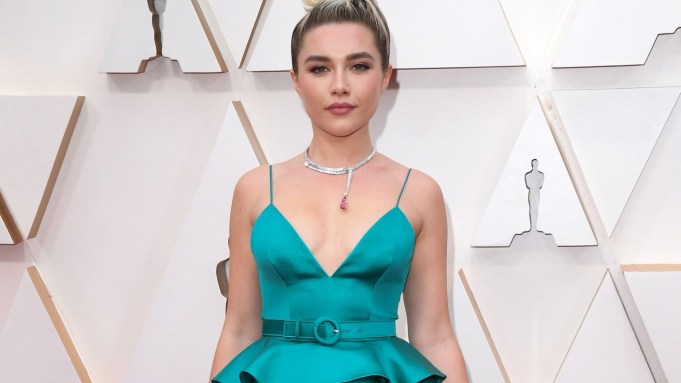 “This is horrible, horrible,” says a reporter. Though it was a sunny morning, it suddenly begins to pour in Los Angeles, and red-carpet production at the 92nd Academy Awards seems highly unprepared. Water is building up, forming puddles on the roof of the sprawling plastic tent. It’s 30 minutes past 1:15 p.m. — when the carpet had been expected to go live. Staff is using long sticks to poke at the puddles, which cascade down splashing reporters and photographers. “It’s a waterfall!” says an onlooker. The temperature suddenly drops and a gust of wind fills the space.

“It’s so cold,” says “The Irishman” actress Stephanie Kurtzuba, wearing Naeem Khan. “Did you bring an emergency scarf?” she’s asked. “No,” she says with a wink. “You just bring a flask.”

Two separate lines on the carpet lead to the Oscar doors. “One isn’t for talent,” says a p.r. rep. “It’s for the untalented.”

It’s 2:31 p.m., and it finally stopped raining. All is well again in Hollywood. “Hurray!” reporters and photographer rejoice. “It’s never meant to rain in L.A.,” says “1917” producer Pippa Harris. She thought she had escaped the gray in London, she adds.

“Where is everyone?” asks a reporter. It’s 3 o’clock, and the A-listers have yet to arrive. The show starts in two hours.

“Oh no, my sandwich!” exclaims 10-year-old “Once Upon a Time in Hollywood” actress Julia Butters, in Christian Siriano. Her sparkly, round Marzook handbag keeps flying open, exposing her snack. “I made myself a sandwich,” she says. “Goodbye bag,” she adds ditching it to pose for a photograph.

Also in Christian Siriano — a red gown — is Chrissy Metz, who’s expected to perform at the award ceremony. “It’s wonderful and terrifying,” says “1917” screenwriter Krysty Wilson-Cairns, in Alberta Ferretti, nearby. It’s her first time attending the show. “I have to say, when I imagined the Oscars, I never imagined metal detectors.”

Spike Lee is sporting a purple and yellow suit — the colors of the Lakers — with the number 24 written on back, honoring the late Kobe Bryant.

“They doubled the width of it,” says a p.r. rep of the carpet. “It’s never been this spacious. They only have two sets of bleachers so they have more space.”

“The Irishman” actor Harvey Keitel stops for reporters. “Oscars come once a year to honor the work, all the work,” he says when asked if he still enjoys attending award ceremonies.

“1917” English stars George Mackay and Dean-Charles Chapman walk by wearing Dunhill and Celine by Hedi Slimane, respectively. “Yeah, it’s bonkers,” says Chapman of being on the carpet. For her part, Caitriona Balfe, of “Ford v Ferrari,” shares “it’s all a bit overwhelming, but it’s very cool…the Oscars are the pinnacle of it all.” She’s wearing Valentino couture.

Janelle Monáe stands out in a sparkly, silver gown with a hood by Ralph Lauren. But soon, all eyes shift to pop star Billie Eilish, who power walks in an oversize, tweed Chanel suit, showing off her claw-like black nails. She, too, is performing tonight.

“Do you want to touch it?” asks “Jojo Rabit” actor Roman Griffin Davis of his black velvet tuxedo. The 12-year-old is standing alongside his costar, 11-year-old Archie Yates. “I’ve been doing it all day.”

“1917” director Sam Mendes shares he was more nervous at the BAFTAs. It was “in front of my home crowd,” he explains. “I think ‘Parasite’ is a masterpiece.” He’s seen it twice, and if his film doesn’t receive Best Picture, he says he’d be happy for them to take it home. “If we don’t win, there will be a silver lining.”

“It moves me to even talk about it,” Renée Zellweger, in Giorgio Armani Privé, says of her experience shooting “Judy,” where she plays Judy Garland.

“Harriet” actress Cynthia Erivo, up for best actress and best original song, is in high spirits. “It feels amazing,” she says. “This feels wonderful.”

Florence Pugh, in a teal Louis Vuitton gown, brought her mom as a date. “Got my mom!” she shares.

Timothée Chalamet — in a navy look by Prada paired with a vintage Cartier ruby and diamond brooch — passes by, but not before he fist pumps a reporter. “Love you, man.”

Moore From L.A.: When the Oscars Red Carpet Tried to Go Green

WATCH: Getting Ready for the Golden Globes With Paris and Dylan Brosnan