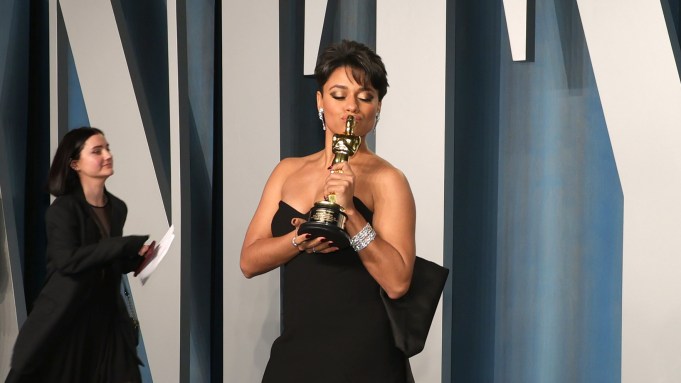 Even the stars get starstruck at Vanity Fair’s post-Oscars bash.

“Look who’s over there,” said a giddy Billie Eilish, raising her eyebrows.

The 20-year-old pop star — who can now add Oscar winner to her list of accomplishments, after taking home Best Original Song with brother Finneas for Bond’s “No Time to Die” — pointed discreetly toward Regé-Jean Page, the breakout star (and heartthrob) of Shonda Rhimes’ Netflix hit “Bridgerton.”

It was a who’s who of A-listers at the party, held at its familiar venue of recent years, the Wallis Annenberg Center for the Performing Arts in Beverly Hills.

The question isn’t who was there; it’s who wasn’t?

Beginning with a viewing dinner, broadcasting the awards ceremony on screens, the event turned into a dance party — as it always does — with guests mingling and letting loose until the early-morning hours. It’s typically around 9 p.m. PDT that Oscar winners begin strutting in from the Academy’s Governors Ball, proudly showing off their engraved trophies.

Such was the case Sunday night, with one particular winner turning heads: Will Smith — this year’s Best Actor recipient (for “King Richard”) who’s made every headline this morning for shockingly “smacking” Chris Rock on the Oscar stage (for a G.I. Jane joke made at Jada Pinkett Smith, sporting a shaved head due to struggling with alopecia).

It was the talk of the party.

“I can’t believe that was real,” remarked a producer. “It was out of his character.”

If Smith was bothered by his actions, it didn’t show.

Busting moves on the dance floor, Oscar in hand, he rapped along to his 1997 hit “Miami,” followed by “Summertime,” from his time in DJ Jazzy Jeff & The Fresh Prince. Jada was by his side.

“What is life,” remarked a passerby, capturing it all on her iPhone.

It was about 12:30 a.m. by then. Actor Patrick Schwarzenegger, hard to miss in a white suit, was in the room. There was also actor-performer Riz Ahmed, winner (with director Aneil Karia) of Best Short Film for “The Long Goodbye” and Smith’s “King Richard” costar, 15-year-old Demi Singleton.

“Where’s he going?” she asked.

Smith had walked out of the circle formed around him, and where he went, the crowd followed.

Back inside, best supporting actress nominee Kirsten Dunst had her arms around longtime collaborator Sofia Coppola as the two walked toward Dunst’s husband, fellow actor and “The Power of the Dog” costar Jesse Plemons. In another corner was Ciara and husband Russell Wilson, with Vin Diesel and Megan Thee Stallion — who was soon at the bar requesting six shots of Don Julio 1942 for her entourage.

Bill Murray, in a beret, stood to her right getting his Champagne glass refilled. An acquaintance snapped a photo of the two, as Megan held up a peace sign — flashing two massive diamond rings.

In another room, woman of the hour Ariana DeBose, Best Supporting Actress winner for “West Side Story,” was dancing to Cardi B’s “I Like It.” She was now out of her red custom Valentino look and in a short, strapless black Monot dress, paired with sparkling silver Birkenstocks once she was off the carpet.

“This is heavy,” said social media star Addison Rae, posing with DeBose’s trophy for a snap before handing it back.

“It is,” DeBose responded, grimacing playfully as she lifted the statue like a hand weight.

The two were hanging with Maddie Ziegler, the 19-year-old dancer who plays Velma in Steven Spielberg’s 2021 film.

Other young Hollywood faces, both content creators and actors, included YouTuber Emma Chamberlain, who was steps away sharing smooches with Tucker Pillsbury; Zendaya, Maude Apatow and Jacob Elordi of “Euphoria”; Lili Reinhart and Camila Mendes of “Riverdale,” wandering together, and 18-year-old Lexi Underwood, who plays Malia Obama in the upcoming “The First Lady” series.

“It’s Dolce,” she said of her eye-catching feathery dress.

“Belfast” actors Jamie Dornan and Caitriona Balfe were nearby, as was “Normal People” star Daisy Edgar-Jones, who plays the lead in the anticipated film “Where the Crawdads Sing,” an adaptation of Delia Owens’ 2018 novel.

As the party was winding down, Troy Kotsur, best supporting actor winner, and costar Marlee Matlin of “CODA” — which took best picture — made their exit. Benedict Cumberbatch, alongside “The Power of the Dog” costars Dunst and Plemons, trailed behind.

“I feel like I spent half the night trying to find where everyone is,” said Cumberbatch, on his cell.

Elordi, Diego Luna and Joe Keery with Maika Monroe were all by valet waiting for rides.

“You decide,” she was told.

“Let’s go home,” she was quick to respond.