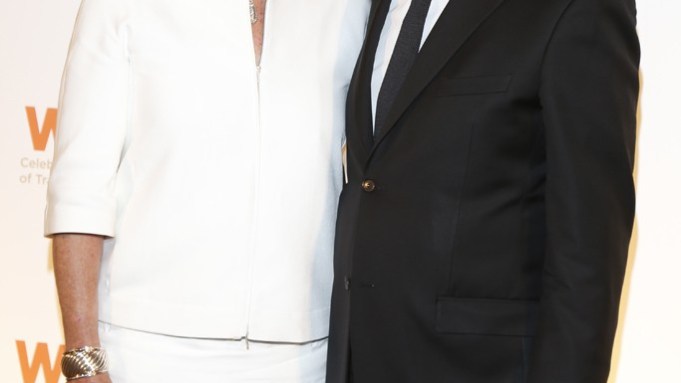 NEW YORK — In a Waldorf-Astoria ballroom filled with balloons and good will, the WIN organization Thursday night staged one of its biggest fund-raisers, drawing more than 1,000 fashion and retail executives and raising $2.3 million for a cause that shelters homeless women and children and gets families back on their feet.

“The need to empower women is something very close to my heart,” said Mindy Grossman, the chief executive officer of HSN, who was honored by WIN along with Calvin Klein ceo Tom Murry. Grossman has been on a philanthropic journey that has recently taken her to Senegal on behalf of UNICEF and to Brooklyn to visit a WIN shelter. “The connection is there,” Grossman said, with women and their families across continents facing the same survival issues. She said she felt uplifted by the WIN shelter because it operates as more than just a shelter, providing support and services to get women back into the workforce and find housing.

Emotions continued high when Candida Herbin, a WIN client, spoke on stage about her life of struggle — abandoned by her father, molested by family members and with a mother who abused drugs. She even did jail time, but said WIN “encouraged me to believe in myself” and praised Betty Watson, a counselor in WIN’s supportive housing program, for her guidance. “Helping others, now that’s my main mission.” Watson, who was in the ballroom, later stood up and waved as she received a standing ovation.

Murry’s moment in the spotlight was a bit lighter, with Ron Frasch of Saks Fifth Avenue speaking of his “goofball” golf foursome, including Terry J. Lundgren, Ken Natori and Murry, which had a series of nicknames: first “the quartet,” then “the doormats” and finally, the “doormatos” which was Murry’s spin. Murry closed the show on a serious note, recounting his visit to a WIN facility. “I felt this energy and happiness when I was there. WIN is a support network for people who don’t see any way through their trauma.”

The WIN gala is an annual event where those helping the cause beyond buying dinner tickets participate in the “balloon challenge,” invented by Stephen I. Sadove, ceo of Saks Fifth Avenue. This time around, $255,000 was raised through the balloon sales, and the Sadoves matched $30,000. “Karin is super involved,” Sadove said of his wife. “She’s basically the WIN ambassador.”