A Brazilian Affair for Calvin Klein and Macy’s

Angela Westwater and David Meitus threw an intimate dinner for Francisco Costa and his new capsule collection for the retailer's Brazil promotion. 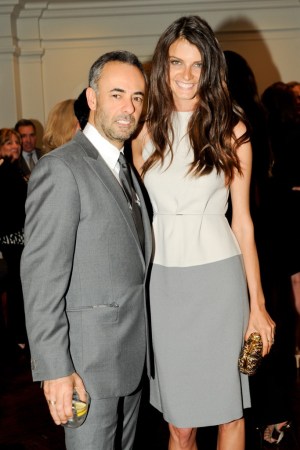 Brazil. It’s a place known for its warmth and vibrance. On Wednesday night, the Brazilian flair was imported to Manhattan’s Upper East Side, when Angela Westwater and David Meitus opened their home for a dinner to fete Francisco Costa and his new capsule collection for Calvin Klein as part of Macy’s “A Magical Journey to Brasil” promotion.

“Angela is such a good friend,” Costa said of the hostess, who is one of the most recognized but understated fixtures of the New York art world. “Being in her house is like being at home.”

The dinner guests at the Fifth Avenue apartment certainly shared the designer’s sentiment, roaming around the art-filled rooms, nibbling on coxinhas and croquettes — Brazilian specialties — and playing with the hosts’ miniature poodle Basket.

For the occasion, Westwater got some Brazilian cookbooks, and she and Costa went over the recipes in honor of the largely Brazilian crowd, which included artist Vik Muniz; actor Rodrigo Santoro, who’s widely referred to as the Brazilian Brad Pitt; models Jeísa Chiminazzo and Izabel Goulart; Lorenzo Martone; television host Pedro Andrade, and Brazil Foundation’s Patricia Lobaccaro. “I think I am the only person here who doesn’t speak Portuguese,” cracked Macy’s Terry J. Lundgren.

The official launch isn’t until next week, but the dresses that are already available at Macy’s — and selling like caipirinhas on a hot day at Ipanema beach. “It’s already a big success,” Murry said. “I was worried we’re not going to have inventory for the big night.”