Socials bounced among a bevy of galas in the city last week. 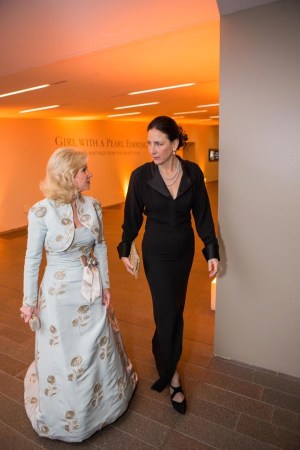 On Tuesday evening, Dede Wilsey hosted a dinner in honor of the de Young’s showing of artworks, including those by Rembrandt and Frans Hals, from the Royal Picture Gallery, Mauritshuis in The Hague. The exhibit, named in honor of its star canvas, Vermeer’s “Girl With a Pearl Earring,” will land at The Frick in New York in October. Wilsey’s guests in the Herzog & de Meuron-designed pierced-copper-clad turret of the de Young included a horde of Dutch dignitaries, the Dutch ambassador, major museum donors and a black-tie cohort of Dutch masters of industry.

“If you’re wondering which of the guests are Dutch, it’s easy,” the petite Wilsey pointed out. “The Dutch are the tall ones. All of them are very tall.”

The exhibit’s titular attraction, which rarely travels, was presented behind bulletproof glass, with a sturdy guard posted nearby. Also ogling the Frans Hals portraits were Jean Larette, Lisa Podos and Katie and Todd Traina.

On the same night at the SFJazz Center, a glassy box in ultramodern contrast to the Beaux Arts opera house nearby, bassist Esperanza Spalding joined Chick Corea in a swinging duo, as jazz stars Mary Stallings, and Pete Escovedo and even Bill Cosby on cowbells made for an electric evening. Shailene Woodley, Nancy Pelosi, Sako Fisher, Amy Tan, Danny Glover, Nion McEvoy, Charlotte Shultz and Delroy Lindo were among the fans taking in the performance.

On Thursday at the San Francisco Ballet gala, the theme was “Moving the Compass,” an appropriate concept for the week. With Yahoo head Marissa Mayer, a longtime and staunch patron of the troupe, in Davos, Switzerland, the party lacked the usual glam-tech sizzle. But it more than made up for it with the arrival of Wendy Schmidt, wife of Google executive chairman Eric Schmidt. Schmidt, who wore a frothy pale blue Christian Siriano gown, has found herself in the middle of a media storm this month after daughter Sophie accompanied her father on a non-State Department sanctioned visit to North Korea. The younger Schmidt’s sharp, witty and uncensored blog posts about her trip with her father to the capital, Pyongyang, went viral. A clip: “It might not get weirder than this. North Korea is a very, very strange country. Reminded me of the ‘We’re Not Worthy’ bit from ‘Wayne’s World.’ Just another example of the reality distortion field we routinely encountered in North Korea.”

“She speaks with the candid, tech-savvy voice of her generation,” said Wendy Schmidt.