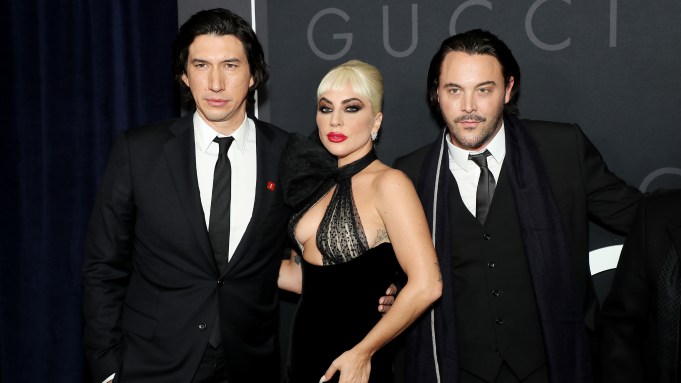 If ever there was a time for wearing head-to-toe Gucci monogram, the “House of Gucci” premiere was it.

On Tuesday night, many guests at the film’s New York premiere obliged the opportunity, donning Gucci everything: shoes, bandanas, bags, pants, tops, skirts, dresses — anything that GG can be tacked on was represented in the theater at Jazz at Lincoln Center.

Other celebrity guests at the premiere and after party at Top of the Rock included Billy Porter, Zac Posen, Andy Cohen, Julia Fox, Olivia Palermo and Johannes Huebl.

Director Ridley Scott and his producer wife Giannina Facio welcomed the cast onstage before the screening. “One thing I can’t remember are lines, so I’m gonna have to read it. I’d never make an actor,” said Scott, unfolding a piece of paper. “This film has been carried by our producer, also my wife, for over 20 years. That’s a hell of a pregnancy.”

“Great scripts attract great actors, and we have an informidable cast,” he added. “In brief, the story can be described as a comedy of errors which seize tragic events. I think it’s best described as a very posh satire. It is kind of satirical.”

Walking onstage, Leto (“always looking gorgeous and fashionable,” said Facio) cupped his hands around his mouth and shouted “hello” into the cavernous theater. Pacino flashed a thumbs-up to the crowd as the cast shuffled back into the wings, and onto the next press appearance.