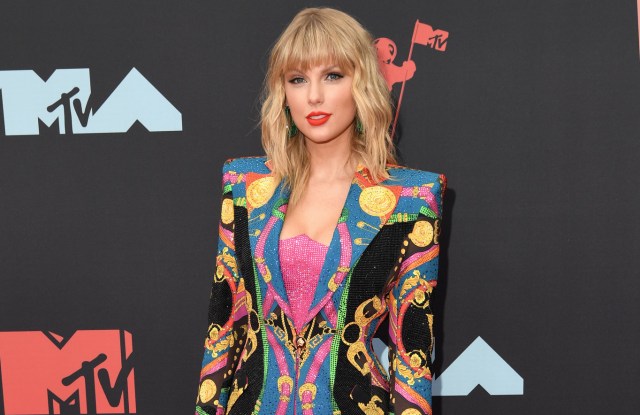 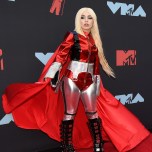 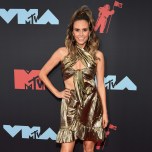 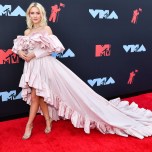 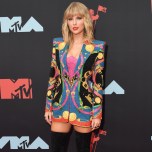 4:48 p.m.: Welcome to New Jersey, celebrities. Last year’s VMAs were held at Radio City Music Hall in New York City; this time around, MTV has secured the stadium at Prudential Center in Newark to accommodate thousands of attendees who’ll sit in the nosebleeds. A crush of fans, (one holding a sign that says “Miley,” with a heart) is already lined up on Broad Street and the surrounding avenues.

4:53 p.m.: A chopper flies low over the red carpet. More fans have been called to fill out the crowd and cheer for the MTV cameras panning by. There are huge silver balls and big silver block letters spelling “VMA” everywhere, plus a large red runway/stage erected in the middle of the carpet. This should be a pretty low-key situation.

5:20 p.m.: Terrence J, wearing a turquoise suit, takes selfies while the crowd woos. Seriously, there’s never been so much wooing ever.

5:21 p.m.: A group of Taylor Swift fans is on the carpet. You can identify some of them by the glittery “13”s they’ve written on their hands. “What are we gonna do, Swifties?” one asks, holding her phone for a selfie. “Meet Taylor Swift!” they cry back.

5:30 p.m.: The Swifties, in unison, repeat under their breaths, “Meet Taylor Swift.” “We’re manifesting it, if you’re wondering,” one says by way of explanation.

5:41 p.m.: Attempting to avoid the crowds doesn’t work for Megan Thee Stallion. She tries to go around a back entrance to the red carpet, but the eagle-eyed fans see her anyway. They go absolutely nuts. “Can you see my ass?” she asks the crowd behind her.

5:55 p.m.: The emcee says “Ladies and gentlemen, please give a warm welcome to Taylor Swift!” The Swifties start to cry and make faces like they are in physical pain. Swift appears in a multicolored Versace blazer and her signature red lip. She does an interview with Terrence J then greets some of the crowd. They chant, “Taylor, Taylor.”

6:14 p.m.: Lizzo, in a bright red Moschino dress that says “Siren” on it, holds both her breasts as she hustles down the carpet. She asks her team to check her teeth for lipstick before she does an on-camera interview.

6:20 p.m.: The arrival of Nicole “Snooki” Polizzi draws one of the biggest chants and screams, hands down, second only to Swift.

6:22 p.m.: Megan Thee Stallion starts doing a performance after having changed into an Army fatigue print outfit. She raps her song “Big Ole Freak” with two backup dancers, twerking and sticking out her tongue. “They done let the H Town hottie come all the way to the VMAs,” Megan says breathlessly.

6:56 p.m.: DJ Khaled comes around for another victory lap on the carpet.

7:12 p.m.: Marc Jacobs, who was awarded the first fashion trailblazer award on Monday night, says he is “very far away from having any sort of collection” ahead of his New York Fashion Week show. But he’s stoked for the evening, adding, “[The award] is a first for me. I never thought I’d have a first again.”

7:14 p.m.: Queen Latifah is wearing an orange suit with tassels by Sergio Hudson. She says she plans to take “a quick, quick, break after the holiday, then it’s a wrap. We go hard. That’s what we do.”

7:22 p.m.: A big group of stars including Big Sean, Bad Bunny and the Jonas Brothers arrives at the same time. A bloodcurdling cry is heard in the distance as someone screams “NIIIICCK!! Oh my god, they’re right there; holy s–t!”

7:24 p.m.: Word on the red carpet is someone got arrested, but it’s unclear whom. They were tackled and handcuffed, apparently. Oh, look, there’s James Charles.

7:43: Rosalía walks by with J. Balvin, who says it’s his first time “really being here.” Having just dropped his album with Bad Bunny, Balvin adds he’s “focused on the tour, which is about to start.”

7:45 p.m.: H.E.R. returns to the carpet to finish interviews. She’s also got a snake on her shoulders. Tana, you’re not the only one.