This year’s event was not only not “dusty old ballet," it was even — exciting?

By Alessandra Codinha on May 13, 2011
View Slideshow 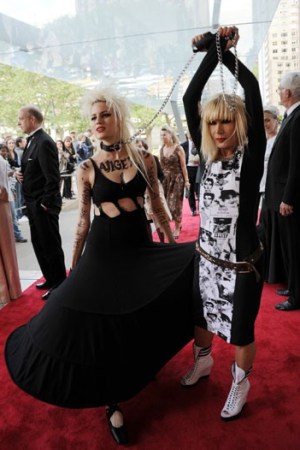 The New York City Ballet’s annual Spring Gala rarely disappoints as a sartorial sight, where tulle, lace, sparkle, elaborate trains and elegant baubles drip from partygoers’ limbs, earlobes and necks. But to the surprise of many revelers on Wednesday night, this year’s event was not only not “dusty old ballet” (as one audience member had groaned before the curtain rose), it was even -— exciting? Guests walked the red carpet (well, Betsey Johnson sort of jigged with a heavily inked friend literally in tow) outside the David Koch Theater at Lincoln Center for the debut of director and choreographer Lynne Taylor-Corbett’s take on Kurt Weill and Bertolt Brecht’s “The Seven Deadly Sins.” The work features star turns by Wendy Whelan and Broadway legend Patti LuPone, who each play one half of a woman divided (Whelan dances, LuPone sings). The ballet’s setting zigzagged across the United States, with the pair experiencing every major vice (envy, lust, gluttony, greed, etc., to mostly hilarious ends) along the way.

Matthew Broderick and Sarah Jessica Parker drew the most flashbulbs in the mezzanine, with excited younger patrons of the arts periodically running up with squeals of “Carrie!” and begging for photos with Parker, as Broderick stood idly by. Parker, the ballet’s newest board member, drew praise from ballet master in chief Peter Martins, who enthused over the artistic committee she had recently assembled.

“She’s really done so much, Sarah,” Martins said. “I can’t thank her enough.”

Martins was equally enthusiastic on the subject of LuPone.

“Patti is an old friend of mine,” he grinned.“We’re ecstatic she could do this.”

But what of the ballet itself? “It was fantastic,” Harry Kargman raved during intermission, before the second and more traditional half of the program (Balanchine’s “Vienna Waltzes”) began. “It’s really been just a one-yawner. I was worried it would be a six or seven.” Kargman joined his wife, Jill, inside along with her parents, Arie and Coco Kopelman. “Patti LuPone is just insanely amazing,” Jill Kargman laughed. “I’ve worshipped her since I was, like, seven and saw ‘Evita.’ ” Applause rang through the halls after LuPone took her fourth and final bow, gigantic bouquet of roses in hand.

The gala was not light on star power, and when the curtain fell, predictably, they rose. Brooke Shields chatted with Carmen Dell’Orefice as they swept up the lobby’s curving stairs to the makeshift, yet somehow opulent, dining room, pausing to greet Vanessa Williams and, later, Victor Garber. Gabe Saporta and Erin Fetherston circulated through the event arm-in-arm, chatting with Arden Wohl before sitting down to dinner. Did watching the incredibly accomplished members of the ballet company leap and twirl inspire partygoers to try out their own moves? “That’s a hard act to follow,” Laura Benanti said with a grin. “But why not.”