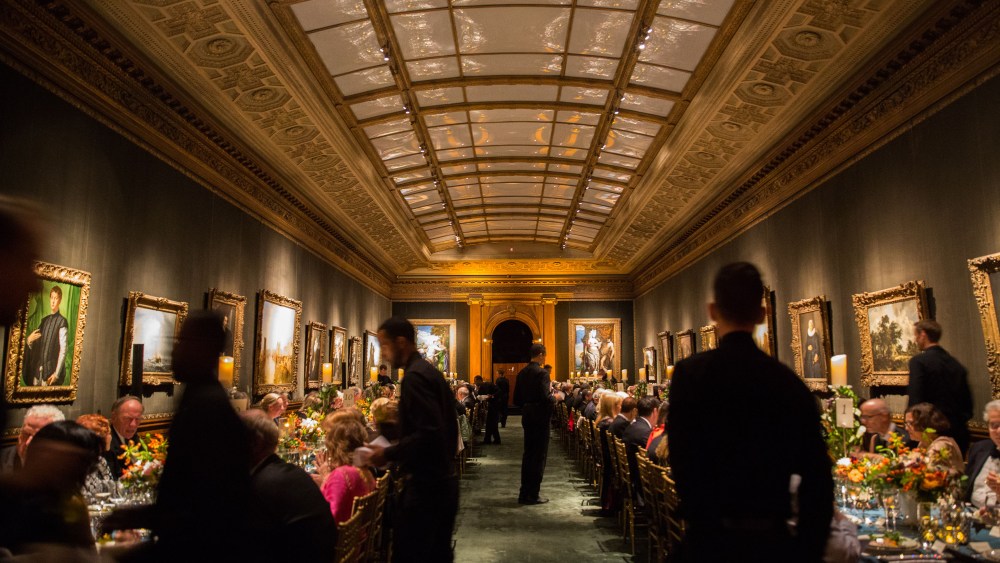 After weeks of unseasonably balmy temperatures, fall finally arrived in New York on Monday evening just in time for the Frick Collection’s annual Autumn Dinner. Throngs of the Upper East Side museum’s passionate supporters flowed into the grand Beaux-Arts mansion, convening for cocktails under the softly illuminated canopy of its enclosed central courtyard.

“This is a family institution and a family house,” explained Margot Bogert, the museum’s former board chairwoman who retired earlier this year after 12 years of service. “There’s that warmth and excellence of taste that is unique to the Frick family. The people here — from the guards to the curators — are what make this an unusually warm, caring place.”

Bogert, the first non-Frick relative to hold the executive position, was being honored for her dedication to the unique cultural institution and was surrounded by her own family who “flocked from all over the country” to celebrate with her.

The elegantly dressed crowd ranged in age, which was an important component to the event for benefit chairs Toby and Larry Milstein. The philanthropic siblings aimed at making the Autumn Dinner “more than just a black-tie affair and to really modernize it with people who otherwise may not be part of the event.”

Toby Milstein, a graduate of Barnard College and native New Yorker, floated past works by Rembrandt, Vermeer and Goya in a steel blue Alexis Mabille gown. “This is the only seated dinner that the Frick orchestrates [in this space],” she explained. “You’re really transported and feel like you’re in old New York. To have [founder] Henry Clay Frick’s decedents here among us tonight you really see a continuation of that legacy.”

“It’s about exposing people to the Frick for the first time, but also honoring the past,” added Larry Milstein.

“A lot of the art wasn’t intended to be put in a museum,” observed chair of the Young Fellows Steering Committee Amory McAndrew. “It was intended for a home. To see it as it was meant to be shown and sit with it here at dinner in a way the collector intended is so unique and special.”

Across a bursting centerpiece of yellow dahlias and café au lait roses, designer Sarah Flint gazed in awe around the sumptuous space. “This is the epitome of New York chic — it’s like going back in time.”

The New England native, who founded her eponymous shoe brand four years ago, found a significant uptick in business when actress Meghan Markle wore her handcrafted creations on an outing with beau Prince Harry. “It’s really changed our business,” she said. “We sold out of those shoes and have over 600 people on the waiting list. We’ve had all kinds of celebrities in our shoes, but Meghan Markle did it.”