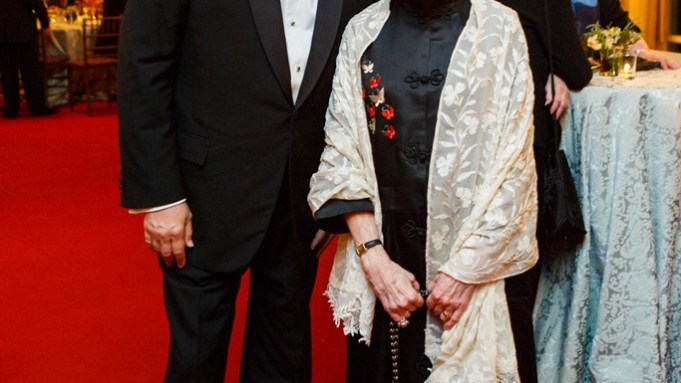 “It used to be too late in the season. Maybe this year, it’s too early,” fretted Constance J. “Connie” Milstein, owner of the Jefferson Hotel and a major political supporter of President Barack Obama. Milstein is chairman of this year’s Washington National Opera Ball, which has been pushed to the top of the social calendar to make room for a heady lineup of parties this spring.

Partying in the midst of political mayhem is becoming something of a Washington hallmark, no better demonstrated than by the Opera Ball. Where else can one find beneficiaries of federal funding, edgy about the constricting effect of sequester delays on their corporate balance sheets, dancing in ball gowns and addressing their hosts as “Your Excellency”?

Typically held in June, this year’s ball is set for April 6, as it now has too much competition to maintain its usual curtain-closer slot in the social calendar. This year’s hosts — Italian Ambassador Claudio Bisogniero and his wife Laura Denise — are busy celebrating a year of Italian culture in America and couldn’t find a free Saturday in June on their social calendar. As for May, the Kennedy Center’s major spring gala fund-raiser is planned for May 5. So instead of bidding adieu to the social season with an 18th century flourish just as Washington’s summer swelter begins, this year’s opera fans will be flouncing around in ball gowns as spring’s cherry blossoms bloom.

To help sound the alarm, Milstein decided to welcome 100 opera patrons dressed in “black and white attire” to an elegant dinner party billed as a pre-ball preview. In case opera fans might be in the dark about exactly who she is, just four days before her party, President Obama chose a private room at her hotel to host his charm offensive dinner with 12 Republican senators. Asked how she felt about having the President at her hotel, Milstein flashed her own brand of Obama cool.

“I wasn’t there. I was out of town,” said Milstein, joining White House social secretary Jeremy Bernard and Kathleen Sebelius, U.S. Secretary of Health and Human Services, at her pre-opera dinner table.

Milstein’s political clout is sure to help raise support for the gala since she’s the first Opera Ball chairman to boast strong White House connections. In December, Milstein and her husband, Count J.C. de La Haye St. Hilaire, sat in the President’s box at the Kennedy Center Honors Gala. Last summer, she gave $300,000 to help defray costs for the Democratic National Convention in Charlotte, N.C.

Then there is the contribution from the city’s diplomatic corps, who have long supported the event. Twenty-one ambassadors will give private dinners in their homes before this year’s ball. Already lined up to give dinners are the ambassadors from Belgium, Brazil, Great Britain, Egypt, Finland, France (whose residence is currently closed for renovation), Gabon, Germany, Hungary, Israel, Mexico, Morocco, the Netherlands, the Sultanate of Oman, Royal Netherlands, Peru, Portugal, the Russian Federation, Singapore, Spain, Sweden and Switzerland.

Kennedy Center officials say they will expand the pool as more tickets are sold. Indian Ambassador Nirupama Rao, a lifelong opera fan, asked if she would host a dinner at her embassy as she did last year, proclaimed herself ready to serve. “I hope so,” she said.

Milstein needs all the help she can get to reverse ticket sales for the ball that have been slipping for the last several years. In 2010, with company costs soaring, celebrated tenor Placido Domingo, the company’s general director for 15 years, said he was stepping down. Opera fans, afraid of a long, painful financial unraveling, turned to Kennedy Center president Michael Kaiser for help. Kaiser, who before coming to Washington in 2001 was widely credited with saving the Royal Opera House in London, agreed. He came up with a plan to merge the company into the Kennedy Center, saving millions in rental, staff and overhead expenses. But since the merger, ball organizers have yet to match the $2.6 million raised by Domingo’s last year when the ball, hosted by China in 2011, attracted 800 guests.

Last year’s event, hosted by the United Arab Emirates, brought in $1.1 million and 500 guests. This year, with the gala coming at the peak of the fund-raising season — and in the midst of both a continued weak economy and sequester-mandated cutbacks in federal spending — it’s anyone’s guess how many embassies will host pre-ball dinners.

“If you are one of those people who always goes to the opera, people will go,” Selwa “Lucky” Roosevelt, the former Reagan White House social secretary, said confidently. “The Opera Ball is an idea borrowed from Vienna, where it’s the most important social event of the year.”

For Milstein’s pre-Opera Ball party held March 10, she hired Norm Lewis, from the TV show “Scandal” to sing “The Music of the Night” to her dinner guests. “That makes the ooh-and-ahh factor for someone like my daughter, who may not know about opera but she sure knows the senator from ‘Scandal,’” said Haddad,who readily admits to being new to opera world.

Over the years, Opera Ball chairmen have contributed in different ways. Among the best known, Betty Scripps, Betty Casey and Susan Lehrman all kicked in large amounts of money to host the ball. When the Russians hosted the event, Lehrman flew in the Bolshoi Opera to help celebrate.

Former Opera Ball chairman Evelyn DiBona figures if the ball could survive her year in the early Eighties, it can survive anything.

“When I was chairman, Italy was also the host country. There was a thunderstorm, and the city was without power,” recalled DiBona, whose husband ran the American Petroleum Institute. “I had to pay $500 to buy a generator for the Italian Embassy residence or else the toilets would not work. And all the embassies who hosted dinners before the ball gave them over candlelight.”