The night's program featured a sampler of the upcoming season. 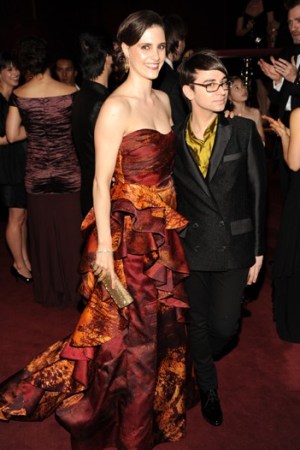 It didn’t take long for the early returns to start filtering in at the American Ballet Theatre’s Spring Gala at Lincoln Center on Monday night.

“The one with the white dress,” Naeem Khan said, explaining his favorite performance of the evening, Jessica Lang’s “Splendid Isolation III.” Ballerina Irina Dvorovenko had donned a white dress with a seemingly endless train for the performance.

“So Noguchi,” he went on. “It reminded me of the days of Martha Graham.”

The designer’s wife, Ranjana, took over.

“It was a dress, it was a cage, it was a rug, it was a bedspread,” she said, cracking up the pair with her last comparison.

The night’s program, a sampler of the upcoming season, provided plenty of post-theater conversation as guests, who included Tory Burch and Lyor Cohen, David and Julia Koch, Elettra Wiedemann and Alexandra Kerry, as well as honorary co-chairs Carolina Herrera, Caroline Kennedy and Blaine Trump, avoided the night’s wet weather in a large tent constructed beside the Metropolitan Opera House for dinner. Jamee Gregory said she was torn between her soft spot for “Swan Lake” and the romance of “Manon,” while Muffie Potter Aston was taken by the dancers themselves.

“The women, the principals don’t even look like they have any bones in their arms,” she said. “They move so fluidly and so freely and so majestically.”

On the whole, the night raised about $1.8 million for the company, a figure the fund-raiser hadn’t reached since 2008.

Though she wasn’t on the evening’s program, ABT soloist Misty Copeland got some attention by way of her dinner companion. The ballerina, who’s been lending her services to Prince’s stage show when she’s not treading more classical fare, arrived with The Purple One in tow. As is his wont, Prince, who earlier this year donated $250,000 to the ABT’s educational programs, avoided the front door for a quieter entrance.

As dinner came to a close and the dance floor began to fill, the pair made an equally hushed exit.