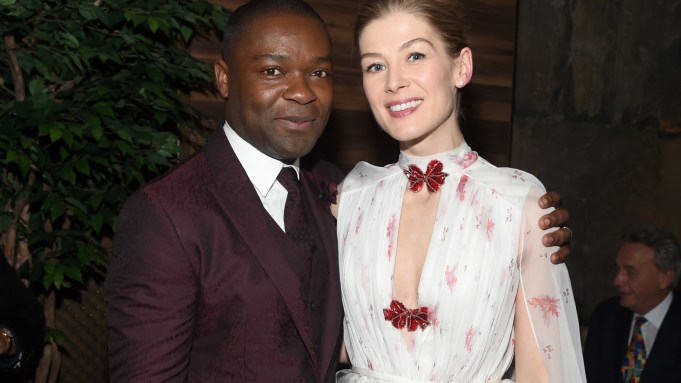 Is love enough to conquer racism? “A United Kingdom” suggests it’s at least enough to start.

The period piece tells the true story of Sir Seretse Khama, the first president of Botswana, and Ruth Williams Khama, who changed history when their interracial marriage in the late Forties was rejected by both the British government and the people of Botswana. It’s based on “The Colour Bar” by Susan Williams and directed by Amma Asante, who was brought on by David Oyelowo.

“He rings me up one evening to tell me about this project that he had first learned about through a book, which is the book our film eventually became based on,” Asante said at the Forevermark-sponsored New York premiere at the Paris Theater. “He had become obsessed with the characters, had been trying to get this movie off the ground for some time and felt now was the time to bring a director on board to really get a structure to it and help to get it up there on-screen.”

Oyelowo was perhaps drawn to the book because of his own experience being in an interracial marriage. “I found that the fact that I am in an interracial marriage just meant my admiration for [Seretse and Ruth Khama] just went through the roof,” he said. “[Jessica Oyelowo] and I are not naive to the fact that there are people out there who wouldn’t be happy about the fact that we’re married and we have experienced atmospheres where you can just feel that people aren’t necessarily happy about that, but we’ve never experienced anything quite like them.”

The movie takes place in both London and Botswana. It’s the first feature film to be shot in Botswana, according to Oyelowo. The crew actually shot in the same house Khama and his wife once lived in, as well as the hospital he was born in. Oyelowo’s wife, Jessica, also has a small role.

“She plays a racist,” he said. “The irony of that was not lost on us at all.”

Jessica Oyelowo was as inspired by the Khamas as her husband. “We’ve never had to defy any governments to be together, but I’m forever grateful to [the Khamas] for pioneering what they did because it broke down public prejudice against such things,” she said. “She was the working class girl from an office, he’s a king and yet people were against them because he was black and you’re going, ‘There’s something messed up with the world.’ It really forced people to look at themselves in the mirror and judge whether they were being fair to this couple.”

Oyelowo and his wife will celebrate 19 years of marriage in September. Jessica said they “always try to do something very special” for Valentine’s Day, as it falls almost six months after their wedding anniversary. They take turns planning a trip every year, and this year, it’s Oyelowo’s turn.

“You’re gonna have to ask him,” she said when asked of their plans. Sadly, Oyelowo was too pressed for time to answer.