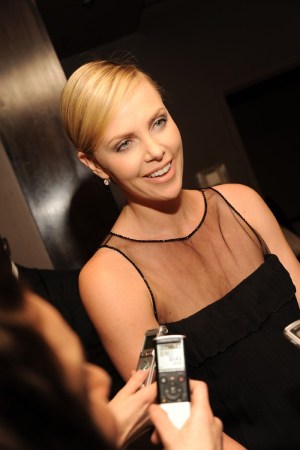 “We’ve been celebrating the curmudgeon in so many movies and shows, but it’s always a guy,” said Diablo Cody on Friday night at the Tribeca Grand Hotel, at a Cinema Society- and Dior Beauty-hosted screening of her new film, “Young Adult.” The movie is her second effort with director Jason Reitman since the critically acclaimed “Juno.” Patton Oswalt, Elisabeth Reaser, Jonathan Ames, Tony Danza and a model crew of Heidi Mount, Hilary Rhoda, Elettra Wiedemann and Anja Rubik picked on popcorn and Starbursts before packing into the theater.

Cody’s frustration at the lack of female cynics and failures in mainstream movies served as inspiration for the star, or more accurately, the antiheroine, of the movie. Played by Charlize Theron, the film’s protagonist is Mavis Gary, a post-divorce, Minneapolis-based young adult novelist who finds herself lost and depressed, not to mention unapologetically mean, delusional and borderline alcoholic. Most mornings, she wakes up hungover in the previous night’s clothes, watching Kardashian-oriented reality TV and swigging Diet Coke from a bottle in the fridge. It’s not quite the typical Theron.

“Playing drunk is actually really hard,” said Theron, whose entrance into the room set off a frenzy of flashbulbs. “I find it really hard to do it in a way that feels believable. Watching it is hard too; I can see right through it.”

Reitman, who was so warmly greeted by guests at Double Seven for the film’s after party that he could barely make it past the entrance, could only speak highly of Theron’s performance, however.

“I like that its about a woman who doesn’t change,” he continued, of what initially drew him to Cody’s screenplay. “I think that’s often true. Real people have problems and they’re presented with the moment and the opportunity to change and they don’t.”