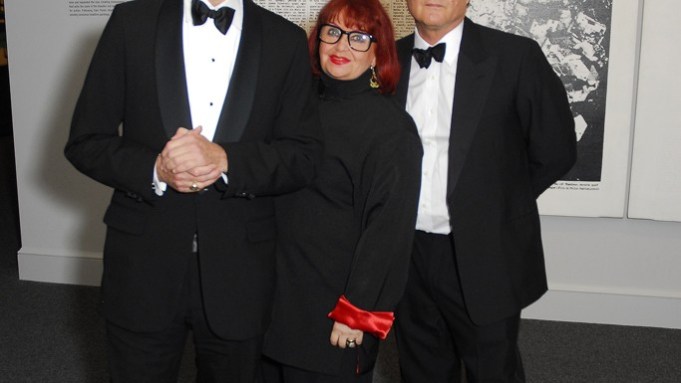 The National Gallery held a black-tie dinner for its twice-postponed “Warhol Headlines” show Wednesday night in Washington. “I love Warhol,” gushed Michael Smith, interior designer for the Obamas, repeating what he had told gallery officials two years earlier when he dropped by in search of paintings to borrow to freshen up the decor at the Obama White House. The remark landed him a party invitation, but don’t expect to find a Warhol hanging in the White House. “Donate one,” he said, adding, “The gallery doesn’t actually have many Warhols in its collection.” Gallery officials quickly supplied the tally — four paintings, one drawing, 70-plus prints and one sculpture.

Among the liveliest additions to the show are four paintings donated anonymously of rock star Madonna under the headline “I’m not ashamed” and “Nude pix: So what.” They were wedding presents to the singer and former husband Sean Penn from Warhol and his friend Keith Haring, and in fact came from the Los Angeles home of Madonna herself. Apparently the quartet didn’t get divvied up in the divorce settlement.

Baltimore filmmaker John Waters walked off with a gift of his own from a fellow party guest, National Enquirer editor Barry Levine: a 1999 edition of the tabloid headlined “Sophia Collapses,” featuring blow-by-blow photos of Italian superstar Sophia Loren taking a tumble at Harrods department store. The spread was Waters’ pick for a New York Times’ virtual millennium capsule as a “ridiculously mean and hilariously funny” example of America’s “love-hate relationship with celebrity and fame.”

After dinner, National Gallery director Rusty Powell gave everyone a great excuse for adhering to Washington’s decidedly unhip penchant for getting home by 11 p.m. “You’re all invited over to the Hirshhorn Museum at 9 a.m. tomorrow for a preopening look at their exhibition of 102 Warhol silk screens,” he declared. Organized independently, the two museums capitalized on the coincidence with a “Warhol on the Mall” headline of their own.

Just before leaving, gallery supporter Buffy Cafritz, in a glittery Mary McFadden gown, offered her own take on the artist. Preferring Andrew Wyeth to Andy Warhol, she recalled of the latter, “When I met him, he was so thin. I asked him what he ate and he said ‘Twinkies.’ That’s what gave me the idea. I went home with a name for my Maltese puppy — Twinkie.”