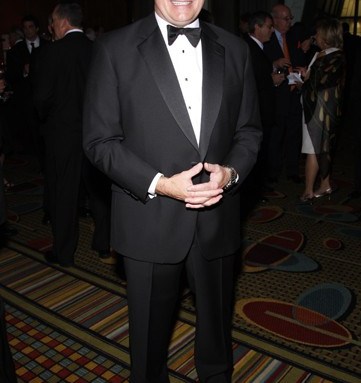 It’s not every day investment banker Gilbert Harrison gets to share a stage with Norma Kamali and Barbie.

But on Thursday night, Harrison, the head of Financo Inc., was singled out for the Lifetime Achievement Award from the American Apparel & Footwear Association at its 31st annual American Image Awards. He was joined by Kamali; Barbie, who is celebrating her 50th birthday this year; Lilly Pulitzer; Michael George of QVC, and Blake Krueger of Wolverine at the event at the Grand Hyatt hotel in Manhattan. Proceeds from the event went to the Fashion Institute of Technology’s Educational Foundation for the Fashion Industries.

Harrison, whose 38-year career as a lawyer-turned-top apparel industry dealmaker was documented by Matt Rubel of Collective Brands Inc., was surprised by a personalized letter from vice president Joe Biden congratulating him on the honor. A visibly touched Harrison said there was “nothing quite as scary as receiving an award for your life’s work…when I have no intention of retiring.”

He went on to say that, as the co-chair of the Educational Foundation at FIT, “it is imperative that scholarship monies be provided to ensure that the future of the apparel, footwear and retail industry survive. We need to bring creativity and innovation back to the marketplace. Additionally, we must strive to deliver exciting new products at a quicker pace.”

Pulitzer, who was unable to attend the event, was awarded the Spirit of a Woman honor by Isaac Mizrahi, who was decked out in hot pink loafers in a nod to the designer’s colorful influence on fashion. “This is the most Lilly Pulitzer thing I could find,” he said, before turning serious. “I think that Lilly Pulitzer is the most important American designer ever. Her work has influenced American designers and international designers. If you are wearing a Lilly Pulitzer dress, they can tell. Whether it’s in Palm Beach or in Milan, in New York or in Russia, it doesn’t matter where you are wearing that dress. They know, it’s Lilly Pulitzer.” Scott Beaumont, chief executive officer of Lilly Pulitzer, accepted the award on her behalf.

Carson Kressley, in his self-designed — and flamboyant — white-and-black dinner jacket, presented the award to Kamali, calling her “one of my fashion idols” and an “industry legend among industry legends.” Kamali said that after all these years she’s “still excited to go to work every day.” Her latest chapter, a line for Wal-Mart, has presented her with new vigor and she remains eager to see “what can be done and what should never be done again.”

George also brought out the star power, including Bradley Bayou and Louis Dell’Olio, both of whom design lines sold on the network. In his acceptance speech, George thanked the apparel industry for “lifting us up and inspiring us every day.”

Krueger seemed a tad overwhelmed with the Excellence in Lifestyle Branding Award he received. “This is a little bit of good news for somebody from Michigan, [and] a special award for a company like ours that toils away in the heartland,” he said.