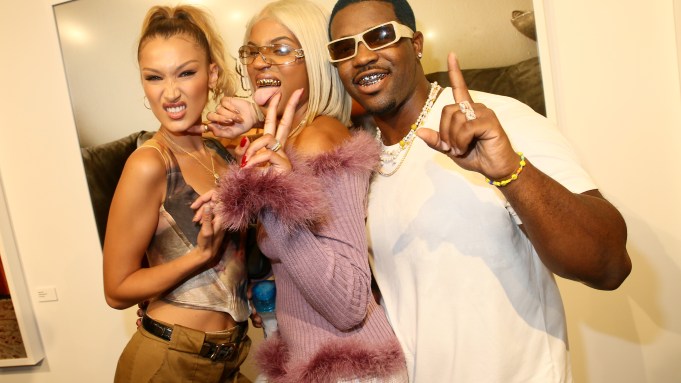 Inside Milk Studios on Thursday night, A$AP Ferg was on the move but easy to spot, thanks to the crowd of flashes that followed him wherever he went inside the packed gallery space. The rapper was there for the launch party of Renell Medrano’s photo exhibition “Peluca,” and at one point he paused to capture a flick of his friend posing in front of one of her framed photographs lining the walls. A crowd of photographers lying in wait made sure to capture the moment.

The young Bronx-born photographer, who has shot album artwork for Ferg as well as Justine Skye and H.E.R, shines a light on wig culture in her exhibition at Milk, which includes both new and recent works including her cover of Dev Hynes for Cultured magazine. The series (peluca means “wig” in Spanish) was inspired by a photograph Medrano had taken of a red-haired woman sitting in a car.

“That’s what motivated me to explore and dive into the whole wig culture and play around with my subjects,” said Medrano, gesturing to the specific photograph across the gallery. “Also the reason why I dived into the whole wig culture is just because growing up, my family and friends always hid away from it, and I wanted to shine a light on that,” she continued, pausing to remove the golden grill from her top row of teeth. “Growing up in an urbanized community, I’ve always seen the ugly, and I always try to shine light on that and make it beautiful. Just to say, we’re all beautiful. The way I picked my subjects is: usually we see the beautiful supermodel, and me growing up, the ugly was the pretty for me.”

There was plenty of character and personality — not to mention beautiful models, hello Kendall Jenner, Bella Hadid, and Brooke Shields — to take in. Bronx food collective Ghetto Gastro was churning out snowcones in one corner, exhibition merch including hoodies, tie-dye shirts, and durags were for sale in another corner, and in the center of the room, guests climbed into a hair stylist’s single salon chair, bordered by an installation of hair piled on the ground, for some on-site primping.

Later, Ian Isiah performed a live acoustic set for the crowd, and A$AP Ferg closed out the evening with an especially appropriate missive: his latest single, “Wig.”