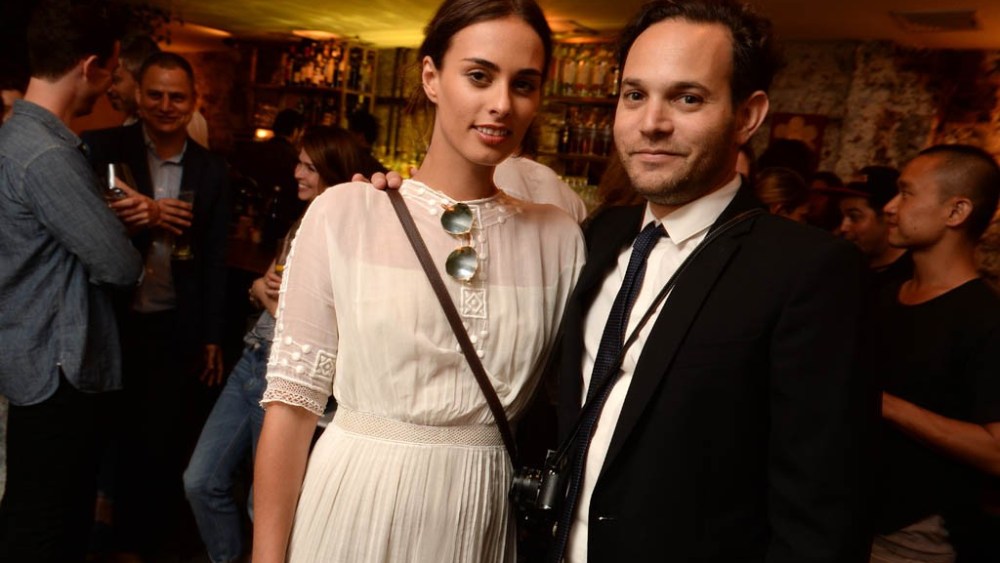 Aaron Stern loves photographing pretty young things, and they love him right back.

On Monday night, The Musket Room in New York was teeming with them — Tennessee Thomas, Atlanta de Cadenet, Brianna Lance, Chrissie Miller, Sophie Auster, Tali Lennox and model Camille Rowe all swanned about. They were there for a dinner party in honor of Stern’s second book of photographs, “I Woke Up in My Clothes.”

Over the years, Stern has made them all look very good in his pictures, and some of them are featured in the book: Rowe appears soaking wet in a bathing suit on one page, Alexa Chung is frolicking on a beach on another.

On this occasion, de Cadenet turned the tables on Stern and photographed him with his own Polaroid camera.

Later, she got a copy of the book signed by him. It read: “For Atlanta: Life is short/Life is long/Depending on/Who you’re with.”

Stern, in a suit instead of his standard leather jacket, was in his element. He flitted around the NoLIta restaurant with a Leica camera around his neck and a Polaroid in his hands snapping away at a few of his best gal pals.

The dinner also drew some of Stern’s more grown-up fans, like Bill Powers, one of the hosts, and Lisa Mayock and her husband Jeff Halmos, who published Stern’s 2012 book of concert photographs, “Everyone Must Be Announced.” Powers, who recently featured some of Stern’s photographs on the online gallery he cofounded, Exhibition A, described the 35-year-old photographer as being in the tradition of William Eggleston.

“But where it’s a little more hyper-realist that it almost becomes painterly,” Powers said between sips of Diet Coke.

Despite the pretty portraits in the book, Stern said it actually captures a bittersweet period in his life, a five-year stretch when he wandered across America while recovering from various romantic heartbreaks.

“The book is about relationships, loss and love. It’s also about America and the colors and the landscapes,” he said. “I had two very destructive relationships and both ended very badly — it was just me wandering around, driving aimlessly and trying to piece it together. Was it me? Was it her? When we’re younger, we think, ‘What did I do? How did I f–k this up?’ But when you’re older, you realize it’s not always so personal.’”

The photographer, who is no longer single, was coming from the Openhouse gallery a few blocks south, where some of the images from the book were on display. He said the book’s title came from a picture he took of the model Julia Dunstall.

“We had both woken up in our clothes. We were both reeling from terrible breakups,” he said, before clarifying: “Not with each other.”