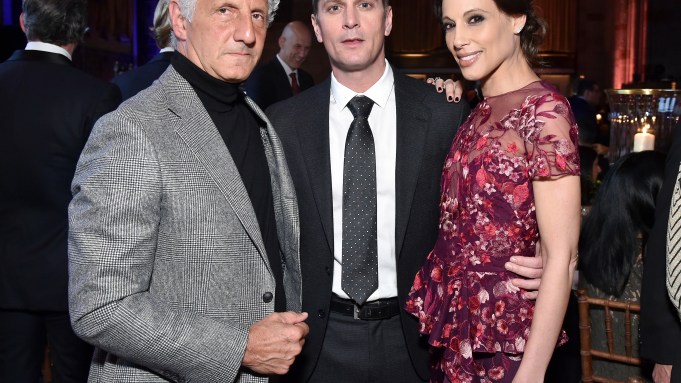 Joseph Abboud’s wife, Lynn, has always kept a low profile. In fact, many in the fashion industry have never even met the designer’s longtime spouse.

Although absent, Lynn was front and center Wednesday night as her husband was honored by the Global Lyme Alliance, a Connecticut-based group dedicated to eradicating Lyme and other tick-borne ailments. Jill had been afflicted with the debilitating disease and spent over a year searching for a diagnosis for her mystery symptoms.

“Take two Tylenol and I’m sure you’ll feel better,” Abboud said in accepting the honor after being introduced by Hudson’s Bay Co. executive chairman Richard Baker. He said that was his advice to his wife as the undiagnosed illness began to take its toll on her health. It continued for more than a year and caused her to fall into a state of depression as the Lyme disease impacted her life.

“Lyme is an insidious disease that literally and figuratively sneaks up on you and bites you in the ass,” he said.

Ultimately, Lynn was treated and has recovered, but the effects of the disease are longer lasting. She’ll no longer take walks to the lake and her time spent outside is now filled with “fear and trepidation,” he said. And so he turned out to help GLA find a cure “so she can walk barefoot in the grass again.”

But Lynn is one of the lucky ones — other victims are still fighting the effects of the disease, including Bella Hadid and her mother Yolanda, who wrote a book about her family’s struggle with Lyme. Yolanda Hadid said the book “is not a sexy story, but it’s my story,” as she battled “the fight of my life” trying to live with a compromised immune system.

The most heart-wrenching speech of the evening came from Marisol Thomas, wife of Matchbox 20 singer Rob Thomas, an animal rights activist who has been fighting the effects of the disease for 14 years. Saying that she is so sick that she wasn’t sure she was even going to be able to attend, she outlined her ongoing struggles with a highly personal account of what has become her life. “There’s not a moment that I’m not in pain,” she said. “I’m in pain right now.”

She said Lyme’s unseen effects make a victim feel guilty, isolated and alone, despite having a support system of a family, doctors and friends. But she’s determined to continue to fight and her motto has now become “JSS: Just Survive Somehow.”

The gala raised $2 million for the cause and also drew others afflicted by the disease including Ally Hilfiger, daughter of Tommy Hilfiger, who has battled Lyme for 27 years.

Lyme has been reported in all 50 states and more than 80 countries and 329,000 people in the U.S. alone contract the disease every year.