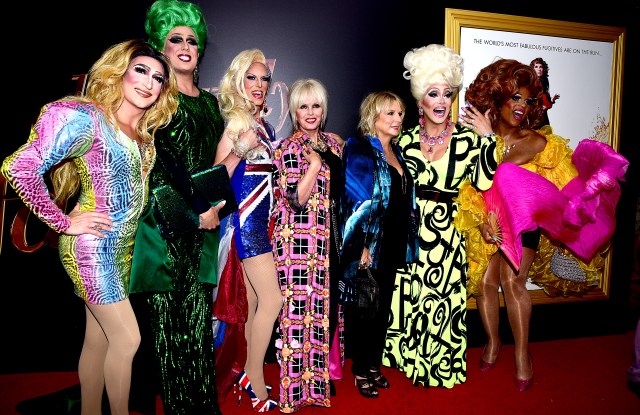 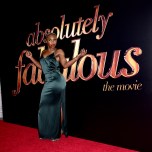 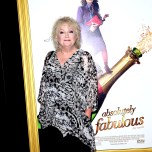 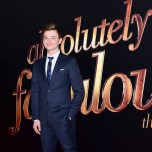 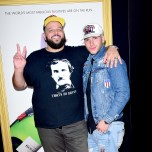 On Monday night, the red carpet for the New York premiere of “Absolutely Fabulous: The Movie” was filled with fans — literally. Harriet Thorpe showed off hers, an embroidered version from Portugal, while many of the drag queens prowling the periphery of the carpet fluttered much larger, elaborate versions in an effort to stay cool in the midst of New York’s heat wave. For those who came unprepared, laminated fans were being passed out — “Ab Fab” duo Patsy and Edina’s headshot on wooden sticks.

The movie is proving to be one of summer’s hottest premieres. “In Britain, it’s gone straight to the top of the list, it’s fantastic,” said Jennifer Saunders, who wrote the film and makes up one half of the leading Patsy and Edina duo. Saunders and Joanna Lumley, whose characters in the franchise are known for their over-the-top sartorial choices, had come out decked in outfits by design pair The Blonds. “It’s a New York designer,” said Lumley on the choice. “You just don’t want to be subtle.”

“[David] actually introduced me to ‘Ab Fab,’ and he’s a huge fan so tonight’s like full circle, it’s really, really crazy,” said Phillipe Blond, walking arm-in-arm with David Blond, who elaborated on the show’s appeal. “The characters are crazy, but they’re sort of relatable to everybody. They have the same insecurities.”

Chris Colfer, a self-described longtime devotee of the show, had the distinct honor of being written into the movie’s script before being approached for the role. “I remember like jumping up and down in my living room when I found out they were coming back in 2010 for more episodes, so I’m still kind of on cloud nine that I was part of the film,” he said. “I think Patsy and Edina — they’re terrible, they’re awful, but they’re so authentic to who they are, and I think that’s what we all respond to. They’re mean and they’re jealous and they’re everything we’re not supposed to be.”

Another class of fans — superfans — were clustered and waiting for a glimpse of the fame and glamour that comes along with a high-profile premiere. Colfer obliged a handful of autograph requests; Lumley stopped to sign a tank top mounted onto a board next to a photo of Patsy wearing the same tank top.

Inside the theater, excitement for the film was palpable. “Welcome to the Republican National Convention,” exclaimed Lady Bunny, walking in to introduce the film’s leading ladies, Saunders fanning herself with her likeness on a stick. The crowd roared. Based on the buzz around the film, it’s unlikely that “Ab Fab” will be cooling down anytime soon.