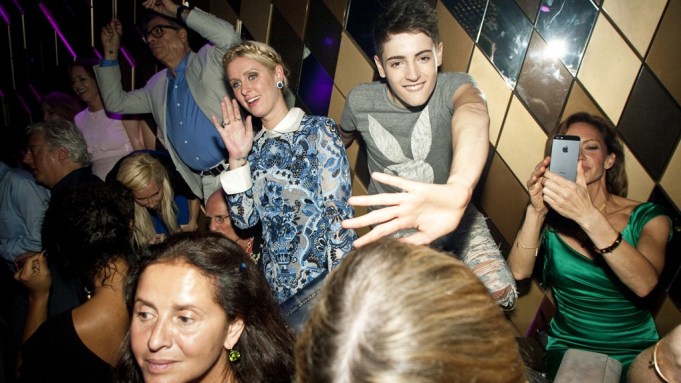 MIAMI — By 1 a.m. Friday, Aby Rosen’s annual Art Basel dinner party at his W South Beach had spilled over into The Wall, the hotel’s club, the site of the after party as well as a promotional event for a Champagne bottle, a limited-edition design by Jeff Koons for Dom Pérignon, the event’s sponsor.

It was the second night of Art Basel Miami Beach. The star wattage at the fair until then had been low — no Beyoncé and Jay Z sightings this year, Kanye West came and vanished on Wednesday — but Rosen, who straddles the worlds of art and real estate, carries a dog whistle heard only by the 1 percent, and they turned out for him.

Here were megastars — Steven Tyler, Alex Rodriguez — and major collectors: Eli and Edythe Broad, Peter Brant. There were three official days of Basel left, but they were unlikely to match the frenzy here. The scene at the club’s entrance was a bottleneck, a crush of clipboard girls, photographers and people hoping to be waved in or just to catch a glimpse of the first genuine star quality of the week. Inside the crammed club, the younger set, bathed in Day-Glo hot pink lights, was restricted to the dance floor while the heavy-hitters, an older crowd, stood comfortably at a remove in the bleachers, floating above the fray. In one spot, Larry Gagosian danced, hands in the air and everything, to TLC’s “No Scrubs” and “Big Poppa” by The Notorious B.I.G.

“I think there’s too many parties here,” Gagosian said earlier at the dinner at the Dutch. Gagosian hardly ever speaks to the press and he seemed disinclined to answer questions — initially, he misheard Women’s Wear Daily as the Venezuela Daily News — but the explosion of events around the fair has raised enough red flags for him that he wanted to voice some concerns. He noted this year he didn’t see as many collectors from Seattle, San Francisco or Europe.

“It could be the social scene swallows the art scene,” he said. “It could erode the core of what made this and I’m a little concerned that serious collectors, people who I do business with, and a lot of my colleagues might say, ‘Well, this is just some social rat f–k,’ and I’ve already started to sense a little bit of that.”

Gagosian had more on his mind.

“It becomes a place to attach a product launch and I understand that. Those are legitimate businesses, too. I’m not a snob,” he said. “All I’m saying is that for my industry, the tail might wag the dog and that could be a problem. Two years ago, the audience was a little more interesting from the perspective of the galleries that come here.”

Gagosian, who as even The New Yorker acknowledged in a profile of another dealer, David Zwirner, “occupies an ecosystem of his own,” was echoing a common complaint among Basel-goers, that in its 12 years in Miami it has morphed from a trade show with a handful of social parties into an enormous commotion, the art relegated to mere subtext. “I nearly skipped it,” said China Chow. “I’ve been coming year after year and to tell you the truth — I don’t know if I should say this — I got e-mailed a lot of bad invitations, like, they’re getting bad. There’s still some good ones, but the bad ones are increasing, they have nothing to do with art. I think it’s because this has been going on for a while now. The same thing happened at Sundance.”

“I think most artists don’t want to come here,” said The Black Keys drummer Patrick Carney, who was DJing at The Wall. He was a first-timer to Basel week but limited himself to the satellite fairs that pop up around it, like Nada. “My idea of fun isn’t going to a big sponsored party. I’d rather be at a Renaissance fair to be honest.”

Of course, Rosen’s dinner and after party is an exception. The crowd here is strictly A-list: Eric Schmidt, Lenny Kravitz, Damien Hirst, Tommy Hilfiger, Karolina Kurkova, Stavros Niarchos Jr. and Jessica Hart, Jean Pigozzi, Adam Lindemann, Richard and Lisa Perry, Steve Tisch, as well as a pack of Schnabels (Vito and Lola) and Hiltons (Paris, Nicky and Barron). The riffraff is kept at bay at the door, their presence required only to create the impression of exclusivity. A-Rod, who came with his art adviser Jeanne Greenberg Rohatyn, was more aloof than Gagosian. “I’m not doing any media tonight,” he said contritely.

Despite Gagosian’s concerns, Basel did well by him this year.

“Good. Not spectacular but good,” he said. There are a few reasons for that. “One reason is that even when there’s a very strong market, you might bring maybe not quite the right mix or maybe bring things that are too expensive. We did good business — we’ve done better in previous art fairs — but I’m not disappointed.”

At the after party, the art world’s chairman of the board held court near the front and everyone who passed by — Chow, Jason Binn, Ethan Suplee, the actor and Leonardo DiCaprio buddy — made sure to stop by and kiss the brass ring. Next to Gagosian was the collector Alberto Mugrabi and laid out before them was a spread of Dom and Belvedere Vodka.

At one point, Gagosian got carried away with a particular song, more appropriate to him, say, than TLC, and danced enthusiastically, sticking his index finger in the air like a number-one foam finger. The song: Sinatra’s “New York, New York.”