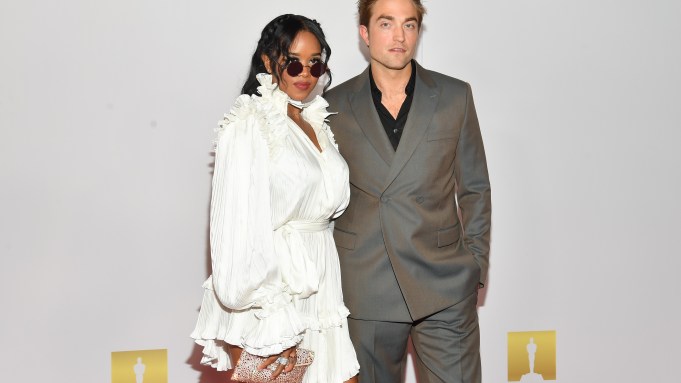 “I just got asked to be a part of the Academy this year,” revealed Pattinson. “It’s just a very, very special thing to be a part of. I mean, I grew up watching the Oscars. When you get the letter, you’re like ‘Oh, my god.’ It’s kind of crazy.”

He paused, then added: “And you get all the free screeners which is kind of amazing.”

As the face of Dior Homme, it was no surprise he was in a head-to-toe look by the house — a double-breasted suit.

“This is my first time meeting him tonight,” said H.E.R., born Gabriella Sarmiento Wilson, of Pattinson after the duo posed together for photographers.

“Honestly, I was surprised,” she went on, of the invitation to cohost. “At the same time, I was like, ‘This feels right,’ just because of being a voice for a generation and representing for the young people, for the young Black people, the young Asian community. I’m really proud. I just feel like we’re stepping into a place where people are being heard, and I think that’s what this place is about and that’s what tonight is about.”

She wore Alexandre Vauthier for the occasion.

“It’s just something that’s a little girlier,” she said of the dress, an off-white number with ruffles, a high collar and poet sleeves.

It was inspired by Prince, she said.

And she was on trend, it turned out — there were plenty of Victorian-influenced looks. Sydney Sweeney, Monet Mazur, Eric Nam and Laura Mulleavy were some of those sporting the style.

“We’re trying to be on theme,” joked Mulleavy of her and sister Kate’s long, floral Rodarte dresses.

The two (who are part of the host committee alongside a mix of artists, actors, filmmakers and designers including Alex Israel, Gia Coppola, Zooey Deschanel, Natasha Lyonne, Jeremy Scott, Simon and Nikolai Haas, Mike Eckhaus and Zoe Latta) had attended the gala as well.

“On Saturday, we thought about the Hayao Miyazaki exhibit, and we thought we were going to wear pastel, dreamy things,” said Laura. “I think this still works.”

Inside, guests sipped on cocktails and Piper-Heidsieck, the exclusive Champagne of the Academy Museum of Motion Pictures (served at this year’s Oscars), while exploring the five levels of exhibits. There were familiar faces, established creatives but also many young up-and-comers, notably cast members of Netflix’s “Outer Banks” like Chase Stokes and Jonathan Daviss, as well as “Never Have I Ever” and HBO’s “Euphoria.” Attendees made their way to the party on the top floor where DJs spinned, drinks flowed and the crowd let loose, mingling and dancing — masks off. Everyone had to show proof of vaccination and a negative COVID-19 test before they were allowed in.

“It’s what L.A. deserves right now,” said comedian London Hughes. “We need an upper after all this time with COVID-19.”

The long-awaited museum, the largest institution in the nation devoted to the arts with 50,000 square feet of space, officially opens its doors to the public today.

After years in the making, how does it feel to finally see the day?

“Miraculous,” said producer and director Michael Mann, who helped conceive the concept as a 12-year member of the Academy’s board of governors. “It is gorgeous. It’s particularly spectacular when it starts to get darker. What [architect] Renzo Piano did is brilliant.”

He continued, “We thought, ‘We are the industry. We make films. Let’s share our process with people on the outside.’ Because no other museum about cinema could do that. They have to look from the outside in. We could present the inside out. That was key to it. So what it should be was a fascinating, exciting question, and it’s a question that will continue. This is just the beginning.”