The 15th annual awards were held at Cipriani on 42nd Street in Manhattan. 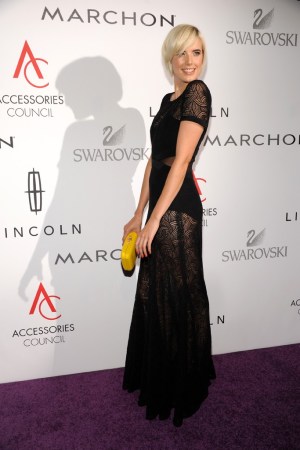 “I believe the accessories council is actually the center of the universe,” said actress Cynthia Nixon, who posed for photos with jewelry designer Temple St. Clair at Cipriani on 42nd Street for The Accessories Council’s 15th annual ACE Awards.

Nixon, who would later present the designer with a Hall of Fame award, spoke about current projects, including a new Broadway show. “It’s not a musical,” Nixon said. “I love musicals, but it’s a Pulitzer Prize-winning drama about ovarian cancer so not so much a musical, but you never know nowadays.”

A somewhat subdued Christian Louboutin, who would later present journalist Kate Betts with an award, dutifully made his way down the carpet. Embroiled in a legal battle against Yves Saint Laurent, Louboutin bristled at the suggestion that he could lose his red-sole trademark.

“Number one, I have the trademark,” he said. “Number two, it’s a night to celebrate Kate and not the night to speak of something that’s a little bit annoying.”