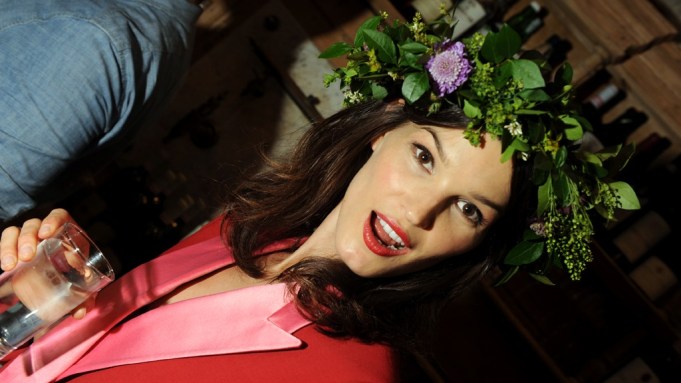 On Tuesday night, Acne Studios celebrated the opening of its New York flagship at 33 Greene Street a few nights before its Friday opening with cocktails and a dinner party at Il Buco Alimentari, aided by the surprise musical stylings of Swedish chanteuse Lykke Li.

“I don’t know if I’m the archetypal Swede,” said Li, who sported heavy eyeliner, skinny black pants and a tight black leather jacket. The singer performed her hit “I Follow Rivers” followed by a “new song, a brand new song” accompanied by the tambourine on which she beat and a lanky blonde guitarist. Directly following the set, Li took to the front of the venue for some fresh air. Andrew Wyatt of the band Miike Snow (and a sometime Li collaborator) bicycled over, as if by kismet: “Did I miss it?”

“My friend is having a birthday party across the street at Great Jones Cafe,” Wyatt explained, embracing Li before adding, “Basquiat lived and died around here.”

Inside the restaurant, Acne designer Jonny Johansson was besieged by partygoers like Shala Monroque, Magnus Berger, Caroline Winberg, Hanneli Mustaparta and Solange Knowles. “I wanted to hang on to our Swedishness, in designing the store,” Johansson said of 33 Greene Street. “The historical references in New York are always very visible to me, and I wanted to take a very Swedish slant with our space…inspired by Gustavian design, very clean, very pure….We’re very happy with how it turned out.”

“You’re taking over the world,” one guest grinned at Johansson as he was swept upstairs and away from the elaborate display of cheese, olives and charcuterie for a seated dinner. The upper level of the venue swelled with revelers (more, in fact, than there were seats for), with most donning the traditional Swedish midsummer wildflower crowns that had been coupled with their place cards or squeezing tighter to accommodate extra guests.