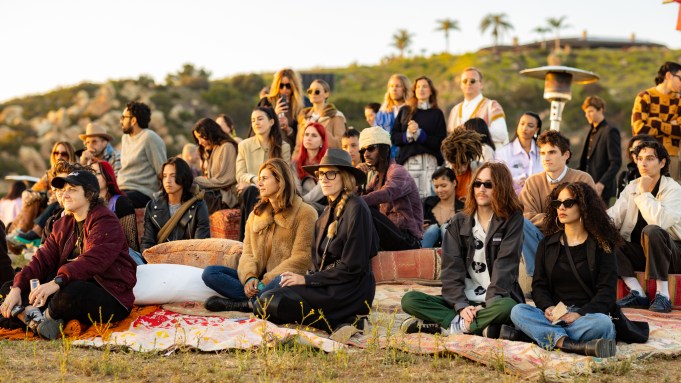 “Breathe in, breathe out, close your eyes, drink,” techno shaman Angelo Plessas commanded the crowd gathered at sunset on a cliff in Malibu, Calif., during a ritual group meditation to celebrate, what else, a fashion collaboration.

Acne Studios, the trippy Stockholm-based label, has always had a sense of Los Angeles as a place, ever since the brand pioneered the downtown retail revival in 2013 when it opened a 5,000-square-foot boutique at the historic Art Deco Eastern Columbia building on Broadway.

Musician-turned-designer Jonny Johansson has since opened a store on Melrose Avenue, too. And it was from there on Thursday night that the brand trucked devotees to the coast and three miles up into the canyons to Eric Lloyd Wright’s ranch for a gathering.

The master of ceremonies was Athens-based artist Plessas, who has been working creatively with technology and the merging of the digital and divine since 1996, and first entered the Acne orbit with a portfolio for Acne Paper. That led to a capsule collection that went on sale Friday.

“I was interested in this mingling of ancient, contemporary and futuristic so I collected a few symbols and we put them on T-shirts, bomber jackets, and so on,” he explained. “They are talismans and symbols of hospitality, friendship, sisterhood and generosity.”

The journey wasn’t easy, across rush-hour traffic, up winding roads and a dirt driveway, clinging to the edge with the ocean spread out below. And many, including model Hanne Gaby Odiele, headed straight from bus to bathroom.

But once everyone got their bearings and maybe a tequila and an artisanal jalapeño popper or two, there was plenty to explore —sandstone rock formations, a picturesque pond and the concrete edifice of the house-in-progress with a view to die for.

The golden hour light was catnip for the selfie-happy group, including actor Greta Lee, negotiating the terrain in silver pants that looked like they could tune in their own radio waves, and Jay Ellis, dressed in a haute hippie scrap jacket.

“I feel like I’m in a nightgown in the best way and could break into a lyrical moment at any time — I don’t know where the night is going to take me,” said singer Kathryn Gallagher, posing in a green printed slip dress. Also spotted roaming around were Chriselle Lim, Lykke Li, Kaytranda and Caroline Polachek, who performed later in the evening.

But first, a sunset meditation, which began with a ritual ringing of a gong, and a performance by L.A.-based professional whistler Molly Lewis.

“Thank you, thank you,” she said after pfweet-pfweeting Debussy over the wind. “No whistling please.” Then she launched into a second song that she said was in dolphin language.

Afterward, Plessas appeared wearing one of his quilted Noospheric capes made from EMF fabric meant to protect against electromagnetic radiation, and adorned with talismanic symbols and emojis. When servers followed passing out tiny glasses of orange liquid, more than one voice could be heard muttering the name Jim Jones.

Reading from a text, he guided followers to turn off their phones (good luck), close their eyes, imagine themselves on a cloud, breathing in the cloud. At intervals, he signaled when it was time to sip the “drinkable elixir” made from organic California wine, saffron, warmed organic honey, dates, peppercorns and laurel leaves.

“I did it, I drank the juice,” a woman said. Everybody did. After the ritual concluded, guests wandered to a photo booth where they could don their own Noospheric capes for the camera. “I came alive once I put it on,” a taker smiled. “We all need healing.”

Then it was time to party.