ACRIA Gets in the Holiday Spirit 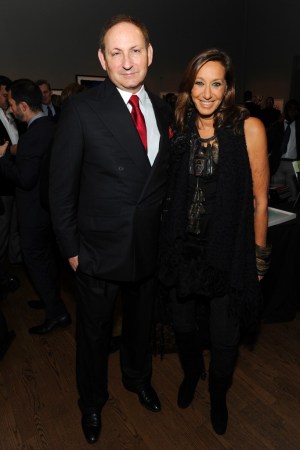 Bruce Weber and his trademark bandana were flanked by a bevy of nude, two-dimensional men at Stephan Weiss Studio for the ACRIA Holiday Dinner party on Wednesday night.

The photographer stood off to the side of the dining room space, perusing a selection of works by Chuck Close.

“I like that image,” Weber said, gesturing at a close-up of two bared male torsos and their rippling muscles. Behind him, low-lying banquet tables were laid out in a sort of criss-cross pattern, dotted with sunflowers and smatterings of tea lights.

Donna Karan and John Demsey were full of holiday cheer despite the deluge outside (later, a sudden leak in the roof left Prabal Gurung literally under the weather at Demsey’s table). The pair entered the dining room arm-in-arm to check out the silent auction before sitting down for dinner.

“We’re two like minds, you know?” Karan continued, “We’re on the same path…trying to change things and push things forward. And I wish more people were like you, John.”

Sure enough, the dinner was in honor of Demsey’s steady support of ACRIA through the MAC AIDS Fund.

“When you’re successful, people don’t ask you the questions that they should,” said the Estée Lauder Cos. Inc. group president. “And you’re in a unique position to help.”

Karan replied, “But you answer them, and that’s all that matters.”

Speaking of the tough questions, when asked about a recent rumor that she intended to retire from the fashion world, Karan exclaimed in bemused horror, “No! I mean, I’m always on to the next thing as far as new stores, new developments, and, of course, it’s always all about Urban Zen, but no. I have such an amazing team and so much going on. I am not going anywhere.”