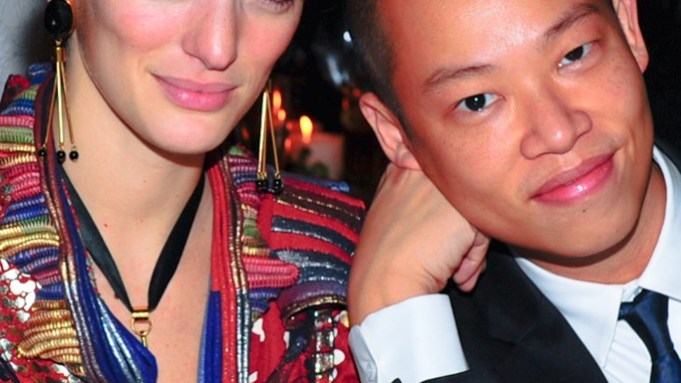 A festive soiree raised funds for a serious cause at The AIDS Community Research Initiative of America’s 17th annual holiday dinner on Tuesday. The evening honored the Elton John AIDS Foundation, which helps fund ACRIA’s service programs in the Deep South, and David Furnish was on hand to accept the award from ACRIA board president Martha Nelson, who noted both organizations are celebrating their 20th anniversaries this year.

Sir Elton John himself was away in Singapore, as part of his current Asian tour, which has him hopscotching to China, South Korea, Taiwan and Thailand. The singer and Furnish are looking forward to “a quiet Christmas at home in Los Angeles, in our new house that we love,” said Furnish. The couple will celebrate the second birthday of their son, Zachary, on Christmas Day, but have no plans to rock around the clock come Dec. 31. “We’re not really New Year’s people. We’ll see who’s around and book a nice dinner somewhere,” added Furnish.

“This dinner always sets the holiday mood for me,” said Francisco Costa, who has a trip to Costa Rica planned for New Year’s Eve with his partner John DeStefano and art dealer Angela Westwater and her husband, David Meitus. However, the designer disdains gift-giving during the holidays. “It’s too time-consuming and too commercial. I don’t think it needs to be Christmas to give a gift to someone,” he explained.

Taking an even Grinch-ier stance was Ross Bleckner. “There’s nothing I despise more than Christmas music. I find it to be torture. I don’t go in any stores from Thanksgiving until Jan. 2,” bemoaned the artist. “I particularly hate ‘Jingle Bells’ and ‘I’m Dreaming of a White Christmas.’ Horrible. In December, I become very Jewish.”