The troubles in Hong Kong and Prince Andrew's disastrous BBC TV interview were all fair game at the Walpole British Luxury Awards on Monday night.

LONDON — Who needs stand-up when there are the Walpole British Luxury Awards, which were laced with laser-sharp comments from the likes of David Walliams, Laurence Fox and James Nesbitt on Monday night.

The annual awards, which took place in the ballroom at The Dorchester hotel in London, highlight the work of British companies and individuals. Walpole, like Comité Colbert and Altagamma is the country’s luxury lobby.

The ongoing troubles in Hong Kong and Prince Andrew’s disastrous BBC TV interview about his relationship with convicted pedophile Jeffrey Epstein were all fodder for jokes that rolled forth from the podium.

Actor, novelist and comedian Walliams wasted no time poking fun at Andrew: “I’d like to thank The Dorchester for hosting this event after Pizza Express in Woking informed us that they were fully booked,” he said, making 400-plus people in the audience giggle over their snifters of whisky. 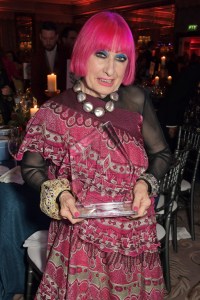 Walliams was referring to Prince Andrew’s bizarre alibi about picking up his daughter Princess Beatrice from a pizza restaurant in Surrey, outside London. In the TV interview over the weekend, Andrew claimed to have been at Pizza Express on the same night that Virginia Roberts Giuffre (who has accused Epstein and others of sex trafficking her, and other underage girls) said she was dancing, drinking — and sleeping with — Prince Andrew.

The prince told the BBC that he cannot recall meeting Roberts and has denied having sex with minors. Chatter about the Prince Andrew/Jeffrey Epstein scandal and the prince’s infamous interview with Emily Maitlis of “Newsnight” dominated conversations earlier in the evening.

Walliams was presenting the emerging talent award to Whitney Bromberg Hawkings, the founder of Flowerbx, the international online deliver service that sources flowers directly from the growers — and he even joked about that business.

Before announcing the name of the winner, he said: “If you want overpriced flowers in your home,” this is the place to go.

Actor James Nesbitt gave the Luxury Leader award to Ewan Venters, chief executive officer of Fortnum & Mason, which has begun expanding globally. “They’ll be opening their first international outpost in Hong Kong this week — or maybe not this week,” he said. 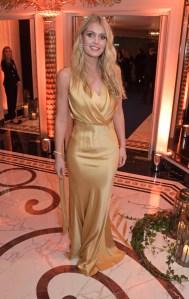 Lady Kitty Spencer was a presenter at the Walpole Awards.  Courtesy Photo

Venters said he already has 105 new members of staff on the ground in Hong Kong, and hopes to open as soon as possible in the region, which has been wracked by ongoing pro-democracy protests.

The popular show — which was extended by two months — featured a “conversation” between Blahnik’s footwear and the paintings and works of art in the collection. It closed on Oct. 27.

“We miss the shoes — there is a real sense of emptiness in the galleries now,” said Bray, adding that it was a quite an education gazing at the galleries’ paintings alongside the aesthete and art lover Blahnik. “I would look at the faces — and he would go straight for the shoes.”

As reported, Dame Zandra Rhodes walked off with the Legend accolade while Burberry won Luxury with a Heart while Dunhill, Church’s and Smythson also scooped up prizes at the event.