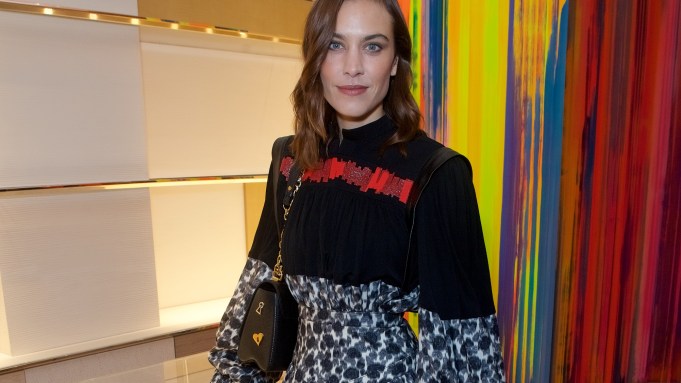 BRIGHT LIGHTS, BIG CITY: “Have you seen all the art? It’s like a gallery in here,” said Shailene Woodley from the swanky top floor of Louis Vuitton’s refurbished, brightly lit New Bond Street store in London, which is wall-to-wall with color-drenched works by artists including Jim Lambie, Tracey Emin, Annie Morris, Josh Sperling and James Turrell.

The actress, who joined guests including Noel Gallagher, Mark Ronson, Poppy Delevingne, Alexa Chung, Naomi Scott, Lady Amelia Windsor and Sabine Getty, is in London filming “Last Letter From Your Lover,” with Felicity Jones. She said she’s loving the city, and will be here for another few months. “I also feel like it’s an ode to my ancestors — my family’s heritage is English,” Woodley said.

Both Delevingne and Chung recalled the store’s first opening party, nine years ago.

“I was doing Facebook Live interviews with no script at a time when live-streaming wasn’t happening yet,” said Chung, adding that she was a bag of nerves interviewing the likes of Marc Jacobs and Gwyneth Paltrow. “I was so young then — I didn’t get anything. But Louis Vuitton did throw the best dinner party ever — with so much incredible weirdness,” she added.

Not that Wednesday night’s party was shabby: The Moscow Mules and margaritas packed a punch compared with the usual, watered-down fashion party drinks, while music pulsated across the three floors thanks to live DJ sets.

“It’s like a nightclub in here,” said Delevingne, who attended with her husband James Cook and who recalled the first party, too. “I used to collaborate with Louis Vuitton when I was a wee little thing,” said the model and actress, whose latest project is the hit Sky TV drama “Riviera,” about rich, aristo types in the south of France.

While the evening had been meticulously planned, there was an air of spontaneity, with one of the recessed light fixtures in the ceiling raining water into a big puddle on the floor.

“It’s an artwork, an installation. We’re just looking for the artist now,” deadpanned Louis Vuitton chairman and chief executive officer Michael Burke who, along with other guests, watched the dripping water with a mix of shock, amusement — and resignation. After all, good builders are hard to find these days, no matter where you live.

Asked about sales projections for the first year, the unflappable Burke said the newly refurbished unit was the “most productive” store on Bond Street, and possibly the most productive in London, too.