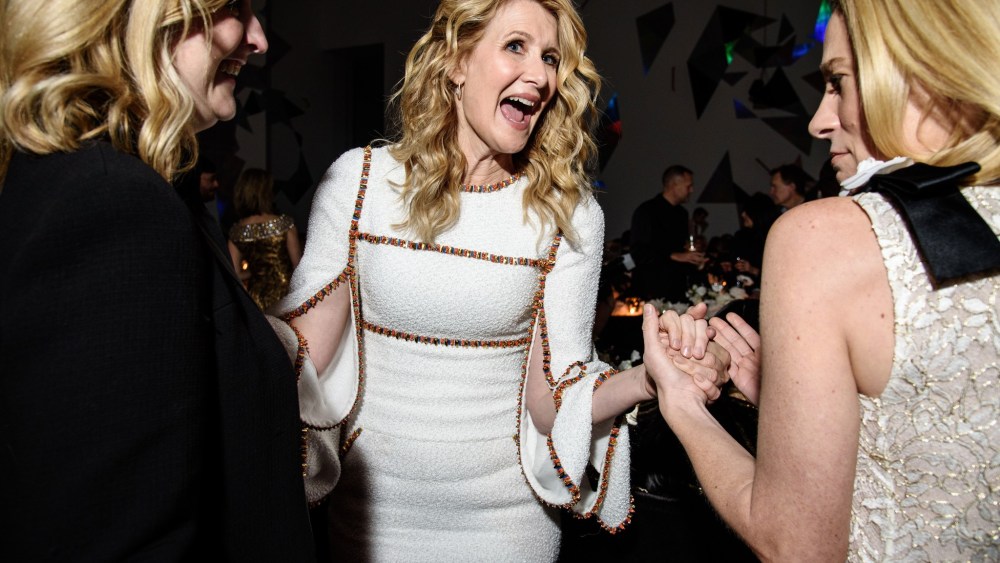 These were the opening words of Naomi Watts’ speech on Tuesday night at MoMA.

The actresses — with Adam Driver, Noah Baumbach, Gwendoline Christie, Brooke Shields and more — gathered at the 2019 Film Benefit for a celebration of Dern’s lifetime of work on screen and as a women’s advocate.

All parties present had worked with or been touched by Dern in some way. And everyone had something deeply kind to say about her.

Driver, who spent the past few months working with Dern on “Marriage Story,” directed by Baumbach, got on stage to deliver some quick comments about his costar before dipping out the door marked “Exit.”

“She doesn’t hide herself from her roles, which is what makes her characters alive on-screen,” he said as the crowd, assembled in the subterranean theater inside the museum, murmured their agreement. “It’s actually one of my favorite qualities about her work as an actor. You’d be correct in assuming she’s someone who’s more interested in navigating different worlds than being defined by them.”

A couple hours prior on the red carpet, Christie pulled Dern into a deep embrace. The latter actress said something that made Christie release a booming laugh.

The “Game of Thrones” alum recalled that Dern was one of the first people to tell her about the “Time’s Up” movement while they were on set together for “Star Wars.”

It was also among the first times she’d ever spoken candidly with another woman about the gender-based pitfalls of their industry.

“Laura actually told me that if you are employed on a film in, I believe, a leading capacity, you can ask for a female sound engineer to work with you and to mic you,” Christie said. “That will enable a woman to have a job in that department, which helps to continue to work toward changing the gender balance.”

For Dern, the characters are the most important part of her work, and they drive her to portray people in unique and yet real ways.

She feels they also tell her own story.

“There’s a piece of me in every single part I’ve ever played, because I couldn’t play it if I couldn’t find that,” she said. “They all deserve a voice, and I think how they are similar is that it’s taken a long time for women to know they’re entitled to a voice in this world, so I’ve been discovering my own through these amazing women.”

Back to the screening room, where Kristen Stewart and Nicole Kidman gave video messages in their absence; David Lynch delivered a surrealist clip of himself pulling out his heart to Dern, and Chanel, which sponsored the evening, was announced as supporting MoMA’s entire film exhibitions for the coming year.

After hailing Dern for her creativity, friendship and idiosyncrasy as a person and an actress, Watts closed her comments with, “I f–king love you, Laura f–king Dern.”