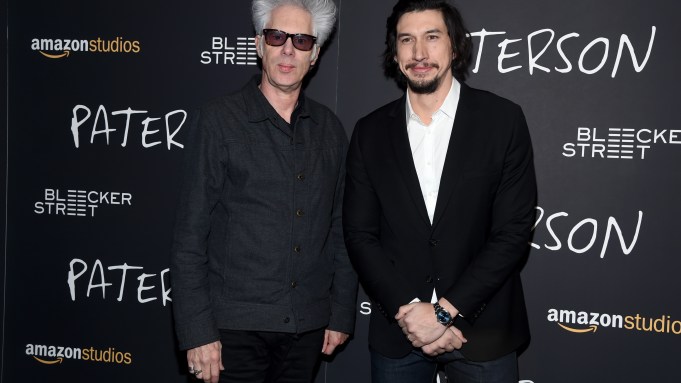 Is Adam Driver letting his star status get to his head? The actor is already entering promotional duties for next year’s “Star Wars: Episode VIII” — and the January premiere of the last season of “Girls” — but on Thursday night, he was showing very little love for his indie flick “Paterson.” Amazon Studios and Bleecker Street hosted a screening of Jim Jarmusch’s latest film at Landmark Sunshine Cinema, and while Driver posed for photos with the director, he circumvented all press, stood silently next to the director as the film was introduced, and skipped the after party across town at the Jane Hotel.

Play the brooding artist cliche, sure, but unlike “Star Wars,” “Paterson” doesn’t have a decades-long franchise and fan base to fall back on, only a well-known indie film director.

For what it’s worth, the film has been getting positive reviews, and Driver also received a positive performance review from his boss. “Adam’s a fantastic actor. I love his face, I love his acting — which is not acting, it’s reacting,” said Jarmusch, left to tout his movie to the few journalists who’d come out to support arthouse cinema. “I love his intuition. He’s just fantastic. I wanna work with him again.”

Driver is the driving force of the movie, playing a poet who works as a bus driver in Paterson, N.J. The poetic movie is structured in stanzas around a week in his life. For Jarmusch, who also wrote the screenplay, the story was several decades in the making. He visited Paterson, N.J., twenty-some years ago, drawn there because of a fascination with William Carlos Williams, whose epic poem “Paterson” was published in 1946.

“I sat by the [Paterson Great] Falls; I walked around,” Jarmusch recalled. “I started reading a lot about the history of Paterson — not toward making a film — but, it’s really a fascinating city historically,” he continued. “It was imagined by Alexander Hamilton as the first American industrial city, and it has an incredible history of labor unions and strikes and anarchists and textiles.”

As for the occupation he bestowed his character in the film, it’s a poetic motif.

“I like the height of the bus and the view of the world, and I like the idea of drifting through a city,” Jarmusch said. “And because he’s a poet letting images drift by, and being able to hear conversations. You don’t get that in a taxi, you don’t get that driving a snow plow. It just seemed like a nice way to float him through.”

What’s going to float Driver through the rest of his promotional season?