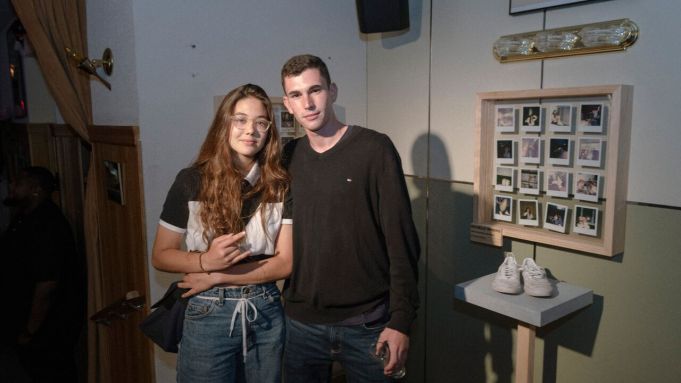 Countless skateboards propped against wood-paneled walls and the lingering smell of pizza added to a sense of nostalgia Friday night at the Adidas Skateboarding 3MC launch party.

The brand was celebrating its newest 3MC skateboarding shoe with a group photo exhibit at The Flower Shop on Manhattan’s Lower East Side. The event highlighted Polaroid photo diaries from 11 different collaborators who got to test the new shoes out for a month, pairing the hanging photos with pairs of the creators’ worn-in kicks.

Rachelle Vinberg, 19-year-old skateboarder and founder of the skate crew Skate Kitchen, was one collaborator showing off her photo diary from the experience. “It’s awesome that they did this whole project of just taking photos — giving people cameras and letting them capture their world,” she said. “I like how like they gave us white shoes to get dirty, you know what I mean?”

The project extended to a variety of creators within the skate scene, including the musical forces of Beach Fossils and TJ Mizell, as well as music photographer Brock Fetch, to name a few. Even the staff members of Scarr’s Pizza, a skateboarder hangout that served up fresh pies for the event, got a shot at testing the shoes for a month — which were easily spotted among the other pairs on display because of the giant dried tomato sauce stains covering the white canvas of each shoe.

Nestor Judkins, photographer and 11-year member of the Adidas Skateboarding team, donned his pair of 3MCs with a beer in hand. “I shoot photos all the time, so for me it was special to shoot a different camera,” Judkins said of the Polaroid diary experiment. “It kind of captures random images.”

Vinberg agreed on the unique scope of the Polaroid project. “On Go Skate Day, June 21, I was skating with some friends and I got skate photos — and it’s really hard to take photos with this camera, because you don’t know what you’re seeing. And they came out right. So I was hype about that.”

Vinberg has a project of her own coming out in August: a semiautobiographical movie and fictional coming-of-age story centered around the world of skateboarding, titled “Skate Kitchen.” Working opposite Jaden Smith and other friends from her crew, the film will feature a hybrid of real-life scenarios and scripted narrative that Vinberg helped friend and director Crystal Moselle construct. “It felt like summer camp, filming. Because it was just skating and having fun,” Vinberg said.

Despite her own burgeoning celebrity skater status, Vinberg was still in awe surveying the skateboarding ranks in the room from the floral-upholstered booth she occupied in the back corner.

“It still blows my mind that people want me to be involved in things like this. I feel like…all these guys, I look up to everyone here.”