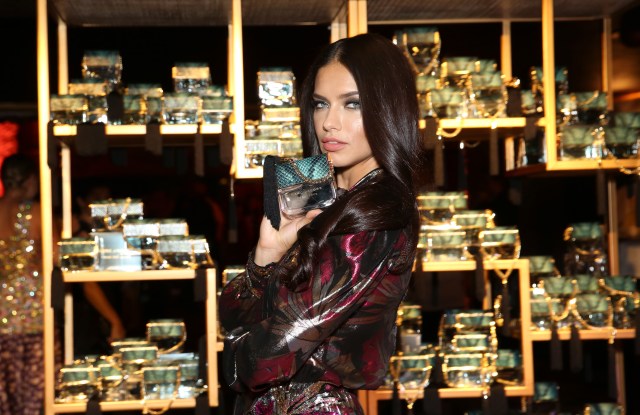 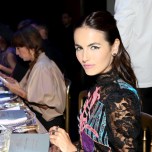 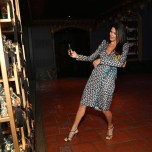 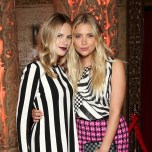 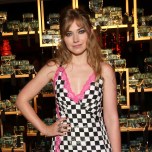 Inspired by the castles and cathedrals that they saw on their honeymoon in Spain, Pickford and Fairbanks instructed architect C. Howard Crane to replicate the ornate stonework both inside and out, while the interiors by Anthony B. Heinsbergen were the last word in Jazz Age glamour.

“I first thought this dress was just colorful and lacy, but I realized there’s a Nefertiti design on the front and a camera on the back,” said Camilla Belle of her graphic pieced-together lace minidress. “It’s a conversation starter.” She had thoughtfully applied Cleopatra-style eyeliner as a nod to the theme.

Another conversation starter was the ornate walls inside the theater, which, like Hedi Slimane’s last Saint Laurent runway show at Hollywood’s Palladium, declared “One Night Only” on the marquee. Lit up to resemble Gaudí’s Barcelona cathedral at night, it kept the crowd looking up. “I’ve never been here before,” marveled Pompeo of the once-reigning movie palace, the site of Hollywood film premieres since its opening in 1927 until 1989. The actress was enjoying her summer break from filming “Grey’s Anatomy” and even brought her husband Chris Ivery for a date night away from their two daughters. “I asked her if I’d be the only guy here. But give me a couple glasses of tequila and I’m just fine,” he said.

After cocktails in the lobby, which was also home to a giant Divine Decadence display that Harmon and others Instagramed on their way inside, Lima led the way into the theater for the big reveal.

“I regret to inform you all that I’m not Marc Jacobs,” said the company’s chief executive officer Sebastian Suhl, by way of introducing Lima. There, the model, perched on the wooden stage while guests occupied the first few rows of seats, entreated everyone to “enjoy the show” as a giant platform carrying rows of mirror-topped dinner tables slowly descended from the rafters to the strains of “Puttin’ on the Ritz.” When it finally landed on the stage, waiters undid the ropes and guests climbed the stairs to find their places at tables named Greta Garbo, Clara Bow and so on.

What seemed like every celebrity stylist in town was also present — Petra Flannery, Jessica Paster, Rob Zangardi, Tara Swennen, Nicole Chavez, Joseph Cassell — and they were duly impressed. “It’s quite the production, and I’ve seen a lot of productions” said Jennifer Lopez’s red carpet and costume guru Zangardi. From the gilt-embossed dinner menus and calligraphied place cards to the delicate stemware (several of which broke before the first course was served) and the shaved truffle-topped ricotta tarts, the evening was glamorous even by Hollywood standards.

“I love that it’s ‘one night only,’” said Harmon, before asking, “You think we can take these bottles of perfume?” of the table ornaments. She swiped hers, but she needn’t have worried: red-capped bell boys at the theater’s box office were handing out bags of perfume on the way out.