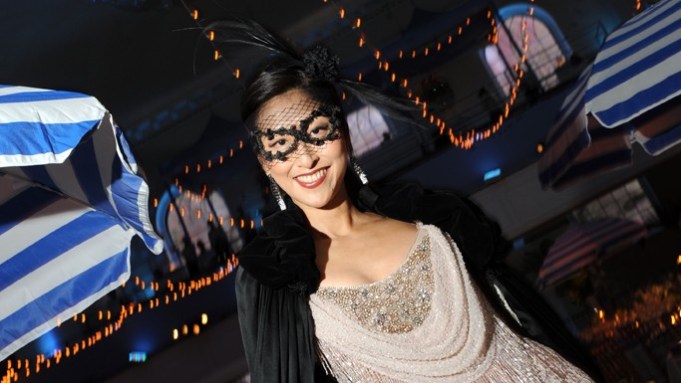 “Are they supposed to be gondoliers?” Hannah Bronfman asked Monday night, indicating the half-dozen flexing male model-types wearing Twenties-style swim costumes at New York’s 583 Park Avenue. The faux bathers served as set dressing at Un Ballo in Maschera, the annual gala held by Save Venice, which has raised more than $20 million for the restoration and preservation of Venetian artworks. The men in question were decidedly unprepared for steering any sort of watercraft.

“We’re not gondoliers,” one said, as a swirl of masked guests passed by. “Gondoliers wear pants.”

The evening was themed “A Night on the Lido,” which explained the swimwear and the naval-striped umbrellas that bedecked some dinner tables as well as the lace-parasol-wielding models in gowns by Badgley Mischka, which cosponsored the event with de Grisogono, who made up the tableau vivant onstage. Guests’ ensembles varied from the maritime-themed to the promlike, though some get-ups were notably more complex than others and nearly all were accompanied by masks.

Will Cotton, one quarter of the recipients of the “best couple” mask award (there was a tie), had made his and Rose Dergan’s out of mussel shells.

“These were dinner on Thursday,” the artist grinned. “I guess it’s rather ‘green’ of me.”

True to form, Michelle Harper had made a significant sartorial effort. “I have to sit side-saddle,” Harper said of her vintage Roberto Cavalli, which was black, backless and very full-skirted (with train). Harper’s makeup artist, who, she explained, had returned that morning from touring with Björk, had painted her eye sockets black, bedazzled the outer rims with three colors of rhinestones and attached what looked like two crow’s wings to her head in a faux-hawk. “People always say these events don’t actually seem fun, like people are really just exhausted and pretending until they can go home,” Harper said. “But this one really is.” She later mugged for photographers with Harry and Peter Brant Jr. on the dance floor after being scolded when the trio were caught in an “impromptu photo shoot in the bathroom.”

“You can tell it’s a good party when people don’t sit down right away for dinner, they sort of table hop and chat together,” she enthused of the fete before getting up to dance. “And people really do go all out for this.”