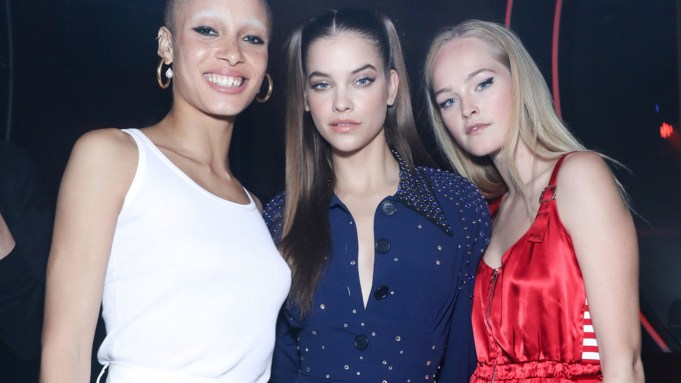 Around 1 a.m., a dense crowd mobbed the front door of the Boum Boum, a swish club near the Champs-Elysées, hoping to get one last rager under their belts as Miu Miu’s after party in Paris closed a month of spring 2018 collections.

“It’s over,” sing-songed blogger Bryanboy as he wove his way into the crush of people. Indeed, with Paris Fashion Week finally in the rearview mirror, many just wanted to cut loose. “Ozark” star Julia Garner, who is to appear as Michelle Jones in the upcoming “Waco,” danced the night away at her table.

Although the party was set to go long into the night, Hugo Matha had plans commencing bright and early: “As lovely as this night is, first thing in the morning, I’m getting my passport done to go join my partner [Nicolas Ouchenir] for his exhibition in Morocco.”

The week had been a compact one, and everyone was feeling the burn. Maggie Gyllenhaal and sisters Elle and Dakota Fanning had made their exit before midnight, leaving Barbara Palvin, Pamela Anderson and pals to party on.

“More water and lemon juice,” mused Miu Miu film star Stacy Martin, as she wrapped up a busy week of filming rather than fashion and was feeling the pain. The actress will star in “Les Joueurs,” a film about poker, set to be released in 2018.

Adwoa Aboah, one of the evening’s “It” hosts, didn’t let exhaustion — she’s been to Marc Jacobs, Chanel and Miu Miu, among many other events this season — get in the way. She had her sights firmly set on her goals for the next few months — upon request for detail, she demurred — but made allowances for downtime beforehand. “I’m taking the weekend off, so the program is Indian takeaway, my favorite dal and garlic naan, and my friends.”

Asked & Answered: How Do You Unwind After Fashion Weeks?

Kaia Gerber: A ‘Super’ in Training