The party marked the launch of her beauty brand's debut on the e-commerce site. 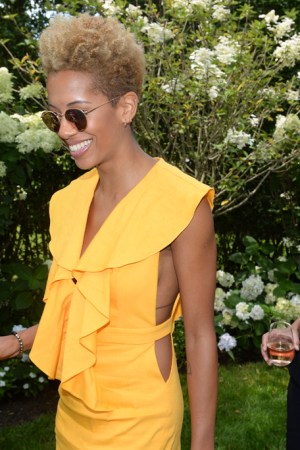 There are far worse ways to spend a summer Friday.

That was the general mood at a lunch thrown by Aerin Lauder in celebration of her beauty brand’s debut on Net-a-porter. The cosmetics heiress hosted the likes of Claiborne Swanson Frank, Jessica Joffe, Natalie Joos and Lindsay Ellingson at her home, which was passed down to her from her late grandmother Estée Lauder (who purchased it in the Seventies).

“There are many elements that we’ve not touched,” said Lauder. “In the front of the house was this beautiful blue and white Chinese room that had incredible china and all of her favorite photos and memories. Everything has been kept as is.”

That’s not to say the house is an artifact. “There’s elements that we’ve added like a kitchen and certain things for a family with two teenage boys,” Lauder continued. “Xbox, which I’m sure she didn’t have.”

Apparently Estee did have some pretty epic garden parties, from which Aerin picked up a few tips. “She always talked about flowers and finishing touches and she used to say everything can be beautiful if you take the time,” she said. As such, blue hydrangeas dotted two long tables that bookended a swimming pool, where guests dined on lobster salad and gelato.

Not a bad summer Friday indeed.