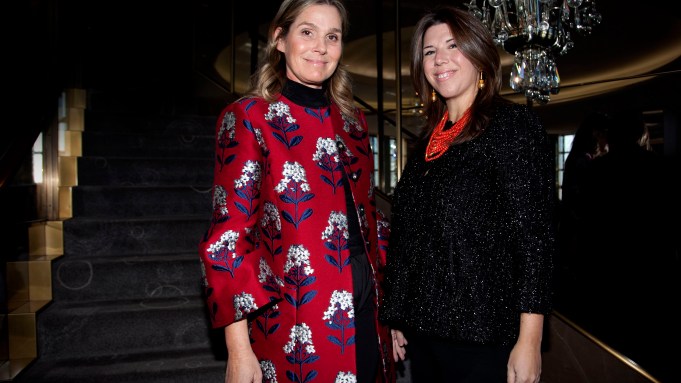 Have you ever heard the sound of 350 ladies speaking at once, in one room? This was the buzzing, high-static noise that emanated from the top of Rockefeller Center at the Rainbow Room in New York on Wednesday as locals gathered for the Central Park Conservancy Playground Partners’ Winter Luncheon. The organization’s heavy hitters — including president of the women’s committee Alexia Leuschen, Gillian Miniter and cochair Mary Beth Adelson — attended in part to hear a conversation between Aerin Lauder and Town & Country editor in chief Stellene Volandes. The other component of the sunny, early afternoon luncheon? Raising money for the cause — for which they pulled together $250,000.

Leuschen said her involvement with the group stems from her respect for the other women involved.

“It’s founded by women, run by women, funded by women,” she explained. “It’s an incredibly relevant organization in terms of showing what movers and shakers women are when they come together to support their community.

“This is a story of women reaching out to each other and saying, ‘Let’s make a place that’s safe for our children to play in. Let’s make a place where our families can convene, but let’s also use these resources in a space that is approachable to everybody.’”

Lauder and Volandes shared their fair share in discussing female empowerment. According to Lauder, the two met at work and have been good friends ever since. So when CPC asked Lauder to speak at the event, she reached out to Volandes to join her for a conversation.

“People are loving what she’s doing at T&C, and they want to hear from her,” she said. “Her vision and her thoughts.”

During the conversation, Lauder touched upon a saying her grandmother repeated religiously.

“Estée had a line she always said: ‘Telegraph, telephone, tell a woman.’ It’s all about communication.” She also added that she thinks Estée would have loved Instagram, “because it’s voyeuristic and fun,” but also because it opens up new worlds and provides material for inspiration and opportunities to link with brands.

“I love Instagram, and if I can’t sleep at night, I do exactly what you aren’t supposed to do and I start scrolling,” Lauder said, noting she’s brought on several jewelry brands to work with her company by finding them on Instagram.

“And you get to see who’s a bad sleeper as well,” Volandes said.

Another saying of Estée’s drew chuckles from the crowd, for a different reason. “You wouldn’t wear the same dress to dinner as you would to play tennis — so why would you wear the same scent?”

A couple women sitting toward the front snickered.

“Well, yes, this was period,” Lauder acknowledged. “This was the Fifties.”

The Whitney Art Party: Quiet Dinner Upstairs, a Rager on the Ground Floor

‘Be More Chill’ Makes Its Rambunctious Way to Broadway