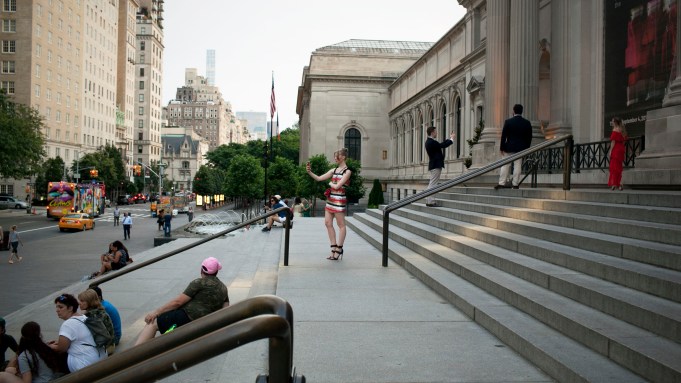 Though the annual Young Members party at the Metropolitian Museum of Art’s target audience is art amateurs between the ages of 21 and 35, much like last year, the event saw quite a few older members that managed to score an invite. Apparently, the allure of sipping on a peach mule or a glass of rosé in the throes of summer is too tempting to resist.

The “summer chic” dress code was definitely open to interpretation, as guests showed up in a variety of looks.

“Basically I just based tonight’s outfit around my shoes (clear pumps), but the exhibit is Comme des Garçons, so I kind of wanted to play off of that,” said Megan Tatem, who does graphic design for Saint Heron, the organization that curated this year’s talent at The Met’s Young Members Party.

“I really had no idea what I was going to wear, but I figured I would wear something that I could only really pull off at The Met,” mused one guest, Rachael Esman. “I had no idea this dress would glow under the lights!”