Showgoers joined the rest of the Hollywood masses at the usual cavalcade of parties unfolding at The Beverly Hilton.

By Marcy Medina and Rachel Brown and Fatima Rizwan on January 14, 2013
View Slideshow 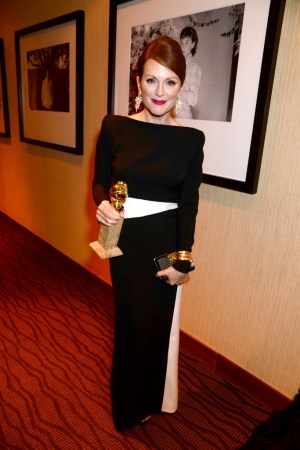 After the last award was handed out in The Beverly Hilton hotel’s ballroom at Sunday night’s 70th annual Golden Globes, showgoers joined the rest of the Hollywood masses at the usual cavalcade of parties unfolding about the hotel’s other corners.

On the hotel’s rooftoop, NBC/Universal’s after party proved to be schmooze central for the “Les Misérables” cast and crew. Best supporting actress winner Anne Hathaway led a pack that included Amanda Seyfried, Eddie Redmayne and Sacha Baron Cohen with wife Isla Fisher. Despite their big win for Best Motion Picture — Musical or Comedy, the group proved to be all sung out and surprisingly press-shy, save Globe winner Hugh Jackman.

RELATED CONTENT: On the Red Carpet at the Golden Globes >>

Following a round of backstage interviews, the actor eventually joined his cast mates at their reserved table. Many a gawker planted themselves nearby attempting to snap cell phone photos, but the winners kept to themselves, enjoying their own private party. Rapper 50 Cent was in attendance, as was Lana Del Ray, who chatted with “Les Mis” director Tom Hooper for at least five minutes (the equivalent of an in-depth conversation at a Hollywood party). Eventually, the focus shifted to best dramatic actress winner Jessica Chastain as she swept through the door. Jackman acted as head of the welcoming committee, greeting the actress with a huge hug. Ewan McGregor also stopped the “Zero Dark Thirty” star for a congratulatory kiss on the cheek.

Julianne Moore and Lena Dunham both won big for HBO at the Golden Globes and turned out at the cable channel’s after party at the hotel’s Circa 55 restaurant. When Dunham entered the party, Sally Field stopped her and gushed to the “Girls” writer, director and actress, “You don’t know how much power you have.” Dunham returned, “It’s so amazing to meet you,” and offered Field a pink rose from a bouquet she was holding. “Just put it between your breasts or something,” Dunham suggested.

Covered in black-and-white graphics, the party had an Art Deco-esque throwback vibe, but inside-outside could very well have been the theme. Although a few brave souls stayed outdoors as temperatures dipped, the indoor half of the soiree was crammed by the likes of Moore, Julia Louis-Dreyfus, Seth MacFarlane and Steve Buscemi.

Olivia Munn shrouded her shoulders in a pink scarf to ward off the chill, and Jane Fonda threw on a velvet coat as a beer-toting Robert Pattinson glided by. Moore’s “Game Change” cast mate Sarah Paulson, wearing a Reem Acra dress she called “a backless Black Swan without the wings,” took at least one thing off for the party: her Christian Louboutin shoes. “It’s like 17 f–king inches,” she said, referring to the heels. Hayden Panettiere kept her footwear on and advised another partygoer to do the same. “If you take them off, your feet are going to swell. The blood is going to rush to your feet,” she instructed.

An elite crowd flew past the masses gathered outside and inside en route to The Weinstein Co. after party. Sponsored by Marie Claire, Chopard and Laura Mercier, the bash drew nearly every A-lister who attended the show, and then some. Inside a dimly lit ballroom, P. Diddy boogied down while quipping, “I got no nominations, and no Golden Globe for me, but this is great!” Also letting loose and kicking back on comfy white sofas were Del Rey, Pattinson, Jessica Alba, Jodie Foster, Kobe Bryant, Paul Rudd and Jennifer Lopez.

Keeping a low profile, Leonardo DiCaprio enjoyed cocktails as he was joined by fellow nominees at the soiree including Sienna Miller, Bradley Cooper, Amy Adams and Bill Murray, who rocked out to “Forget You” by Cee Lo Green on the dance floor.

Always considered party central at the Beverly Hilton on Globes night, the InStyle-Warner Bros. party saw a steady stream of A-listers all night. Even Mr. Smooth — George Clooney — was overwhelmed by the crush inside the giant tent, attempting to take a shortcut through the catering hallway before giving up and returning to schmooze for a few minutes. Summing up what most people thought of the telecast, cohostess Amy Poehler told Kristen Wiig on her way inside, “Oh. My. God. Your bit was hilarious. I was laughing so f–king hard.”

Others didn’t even bother heading into the tent, as the Godiva-sponsored lounge just outside offered plenty of sweet distractions like hand-passed chocolate-covered strawberries. “Don’t get that on your dress, honey,” Rosario Dawson’s manager admonished as the actress bit into one. Alba, free from her Oscar de la Renta train and into a knee-length Louis Vuitton checkered dress, posed for photos in front of a wall made entirely of chocolate. Naomi Watts echoed Alba’s sentiment earlier when she said, “The train is a nightmare. For me, and everyone.” Also pausing by the chocolate wall was Foster, with sons Charles and Kit in tow, both of whom took turns holding her Lifetime Achievement award. “This is pretty cool,” grinned Charles, who stands a few inches taller than his mother.