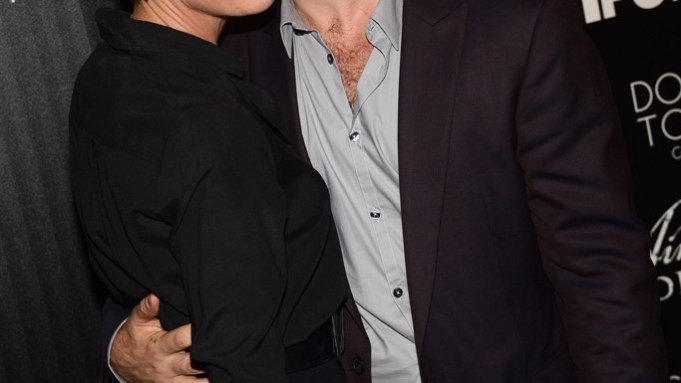 “Ain’t Them Bodies Saints,” is a grand, doomed love story — or so says the film’s poster. At Tuesday night’s premiere in New York, hosted by Downtown Calvin Klein and the Cinema Society, writer-director David Lowery offered a much simpler definition.

“It’s a piece of folklore,” the mustachioed director demurred on the press line of the Museum of Modern Art-held screening.

The Seventies-set drama stars Rooney Mara as Ruth, a Southern single mom caught in a tragic love triangle with her daughter’s father, Bob (Casey Affleck), who has recently escaped from prison, and the local sheriff (Ben Foster) who helped put Bob in jail.

Foster, dapper in Calvin Klein Collection, took to the carpet with girlfriend Robin Wright, bestowing several kisses on her cheek, cueing a barrage of blinding flashbulbs from the snap-happy photographers.

Wright confided that she had come straight from the set of her Netflix hit “House of Cards,” which is currently filming its second season in Baltimore. In the frenzy to catch a train to New York, the Emmy-nominated actress took off in her character’s costume, an all-black ensemble à la her polished politico character.

“They know I borrowed it,” Wright laughed.

Mara’s arrival elicited a fervor among the frothing paparazzi pit. Richard Gere, Debra Winger, Zosia Mamet and Courtney Love capitalized on the diversion to sneak into the theater nearly unnoticed.

Making her way down the press line, the wide-eyed brunette discussed the appeal of her role, the latest in a string of strong female characters Mara has amassed in her still-young career.

“She does have a lot of strength, but she’s also in a very vulnerable situation,” the actress said. “David made it really easy because he wrote a really beautiful, fully realized character.”

While Ruth spends the film in gauzy sundresses and worker boots, Mara had donned a two-piece Calvin Klein Collection ensemble. “I just love how simplistic and modern they are, but they still also feel timeless. I love Calvin,” Mara said of her proclivity for Francisco Costa’s designs. “I think that’s a hard combination to achieve.”

Costa confirmed that the feeling is mutual.

“It’s like a love affair,” the designer said. “You feel so enamored by her personality and her roles. It’s been great to work with her. It’s a perfect match.”

The premiere marked a brief respite for the designer, who is deep into show preparations.

“Look at me,” Costa laughed as a helpful reporter removed a dry-cleaning tag the designer had forgotten to snip from his crisp white button-down before walking out the door. “I need a vacation already!”