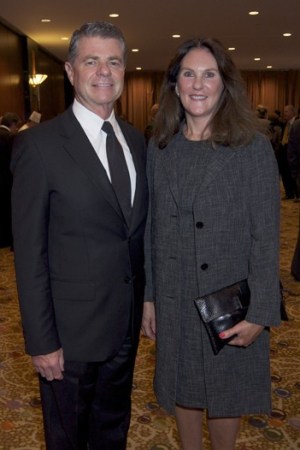 NEW YORK — For Wes Card, chief executive officer of Jones Apparel Group Inc. and a Baptist who grew up in East Greenwich, R.I., there was irony in being honored by the American Jewish Committee.

“As a kid, I really don’t remember prejudice in the community,” Card told the crowd of 600 at the Hilton Hotel here on Wednesday night, when he and Tom Murry, Calvin Klein president and ceo, were honored with AJC’s National Human Relations Award during an event that raised $2 million for the organization. “I really came from innocence. It’s only when you go through life that you learn of all the bad things that can happen.”

Card said the first time he experienced prejudice was when an aunt said she wouldn’t attend his wedding if he married a Catholic, which he did. Card has been married for 40 years to his wife, Dianne, and together they raised three sons. “By the way, my aunt did come to the wedding anyway,” he said.

Emanuel Chirico, chairman of Phillips-Van Heusen Corp., lauded Murry as “the most valuable asset” when PVH bought Calvin Klein in 2003. He credited Murry’s leadership with helping to double the brand’s sales to about $6 billion, as well as creating a family atmosphere at the brand and for his involvement in social action causes.

Murry was obviously moved by the introduction. “Wow. I have to collect myself after that,” he said from the podium, before praising the AJC and show of support for the organization. Among those who attended were: Macy’s Inc.’s Terry Lundgren, Peter Sachse and Jeff Gennette; Lord & Taylor’s Brendan Hoffman; The Warnaco Group Inc.’s Joe Gromek, and designer Rachel Roy.

“AJC exists to insure that there will be someone left to speak out,” said Michael Gould, chairman and ceo of Bloomingdale’s and chairman of the AJC board of trustees. “At the end of the day, no one is going to be remembered for our numbers. We will be remembered by what we are able to do for others.”

The 104-year-old AJC has a multifold mission: to fight anti-Semitism, terrorism and bigotry, preserve the rights of minorities the world over, support tolerance and Israel’s right to exist.