Thursday night’s gala benefiting the American Jewish Committee was a record breaker, with more than $4.5 million raised by the crowd of 1,236 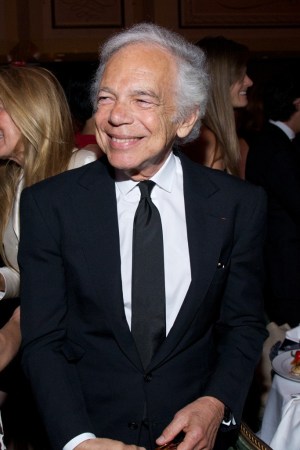 NEW YORK — There was nothing perfunctory about Thursday night’s gala benefiting the American Jewish Committee. It was a record breaker, with more than $4.5 million raised by the crowd of 1,236, who witnessed the more personal sides of David Lauren, the executive vice president of global advertising, marketing and communications for Ralph Lauren Corp., and Eric Wiseman, the chairman, chief executive officer and president of VF Corp. Both were honored with the AJC’s National Human Relations Award at the Hilton Hotel.

“David has manifested a strong independent streak and strong sense of justice,” said his college professor and mentor Joel Fleishman of Duke University. “He resisted working with his father and was determined to make his own reputation as a professional.” Fleishman also said Lauren started up a magazine at Duke, launched and built ralphlauren.com into a business generating hundreds of millions, and recounted a story of Lauren as a young child threatening to leave home after he couldn’t get the shoes he wanted because his size wasn’t available. He was so upset he dressed up in his superhero costume, stood by the front door and said to his family “Aren’t you going to kiss me goodbye” and was lured back by an ice cream cone.

Lauren, in his laid-back manner, gave an impassioned speech touching several themes, including Ralph Lauren as the embodiment of the American dream; the “cancers of racism, intolerance and xenophobia,” and how his grandparents explained that tyrannies of the magnitude that befell the Jews in World War II can happen again. The shout out to his father, who was visibly choked up at times seeing his son honored, was most touching. “My father, he may be emotional. That’s true.”

Karen Murray, president of VF’s sportswear coalition, introduced Wiseman, noting he was in jeans when he interviewed her for a job. “He has a calm presence that fills the room,” Murray said, further describing Wiseman as collaborative and committed to emerging leaders in the organization. “That first day, he became a mentor for me.”

Wiseman said the best thing for him is working with the people of VF. “We describe ourselves as a performance-driven company. AJC is also a performance-driven organization.” Wiseman acknowledged that few in the crowd knew him well, that he did a lot of foolish things in his life, but at 22 “saw through the fog” when he decided to get married.

AJC’s mission is to secure the well-being of Jews and Israel and advocate democratic values and human rights and religious freedom for everyone. Bloomingdale’s Michael Gould, Ralph Lauren Corp.’s Jackwyn Nemerov, AJC’s David Harris and Murray were among those recognized for their service to the organization.