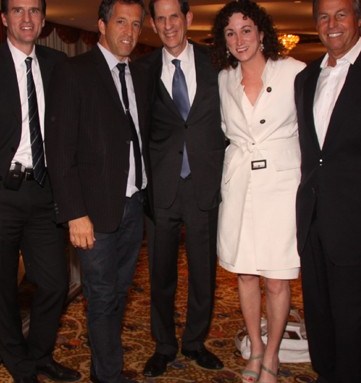 Outside the grand ballroom of the Hilton Hotel Monday evening, Leonard Marcus, president and chief operating officer of Macy’s Merchandising Group, reflected on the large crowd gathering for the dinner benefiting the American Jewish Committee. “It’s a real tribute that in this environment people are stepping up,” said Marcus.

The event, which raised $2.1 million and drew about 950 guests, was also a tribute to Marcus. As the evening’s honoree, he was cited for his long retail career and his charitable deeds. “This is an individual truly deserving of our deepest appreciation,” said Bloomingdale’s chairman and chief executive Michael Gould, an event chair.

Marcus noted he started his career in the training program of Abraham & Straus, right after graduating from Brooklyn College in 1974. He rose through the ranks to become president of the store, later became president of Stern’s, and eventually joined Macy’s Merchandising. The Stern’s and A&S nameplates have been taken down and replaced by Macy’s.

Marcus has been one of the main engines behind the growth of Macy’s Merchandising’s stable of private brands, which includes INC, Charter Club, Alfani, Tools of the Trade, American Rag and Tasso Elba. According to Marcus, Macy’s Merchandising currently represents almost 19 percent of Macy’s total business. “We plan to get to 20 percent through continued organic growth,” he told WWD. “Right now, we are not launching any new brands. There will be no new ones this year. We have a good balance between private brands and market brands at this point.”

Upon receiving AJC’s National Human Relations Award, Marcus cited the organization’s mission. “AJC protects human rights and assists in disasters for all people of the world — not just Jews.” It also helps fight terrorism, supports Israel, combats anti-Semitism and other forms of bigotry, and works to defend religious freedom around the world.