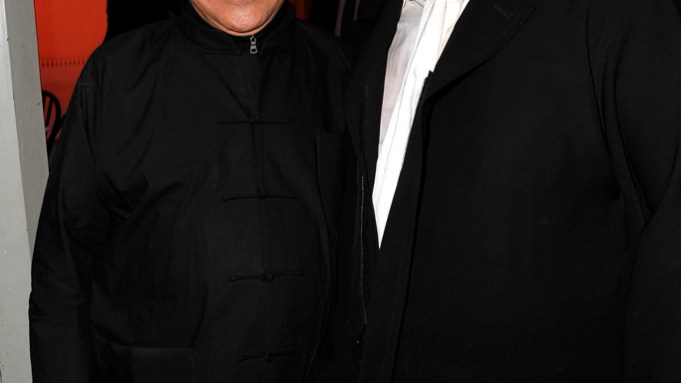 HIS WAY: If you think fashion designers are demanding, try world-class castanet players. Rumor has it Lucero Tena’s contract specified no eating or drinking during her 55 minutes of pre-dinner clackety clack at Azzedine Alaïa’s fragrance launch party in Paris on Thursday night.

No matter how hungry they might have been as the clock ticked past 11 p.m., the crowd went wild, giving Tena and Sergio Kulmann, her pianist, a rousing ovation.

And so went the evening: small interludes of food and wine, long stretches of entertainment — including a dazzling dance by Blanca Li in a swirling blood-red dress — all for one of French fashion’s most enigmatic, and universally admired talents.

“I love this man. He’s very discreet, and it’s very rare in fashion,” enthused French actress Rachida Brakni, aka Mrs. Eric Cantona, who just wrapped her directorial debut, “De sass en sass,” due out in 2016. Set in a prison, the play-like drama depicts a family of women during visiting hours.

“I worked with no professional actors,” Brakni noted.

“He does it his way. He doesn’t follow any system and he goes with his heart and with his talent,” Elbaz said, rushing to embrace Christophe Girard, a former boss from his Yves Saint Laurent days.

Girard, now mayor of Paris’ fourth arrondissement and an executive at LVMH, seconded the thought: “Azzedine is a good example of what fashion should be — long-term to resist the pressure. Look, he has a perfume only now.”

Isabelle Huppert, Carla Bruni, Sophie Hicks, Betty Lagardere, Farida Khelfa and nightclub impresario André Saraiva were among guests at the party, which commenced with a cocktail around a giant breast sculpture by César Baldaccini.

“I just saw one in a catalog, they’re re-editing them,” Saraiva said as he admired the hulking work.

Anish Kapoor landed at the dinner after spending the day at Versailles, installing his otherworldly sculptures at the 17th-century chateau. That show opens June 7, while Alaïa’s eponymous fragrance debuts in some markets, including France and the U.K., starting in July.