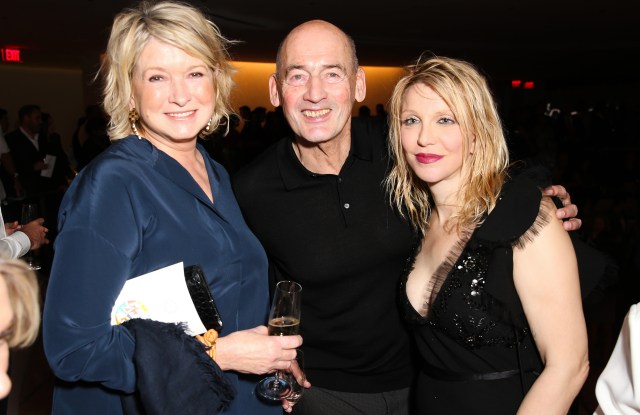 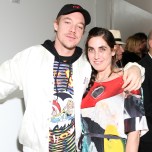 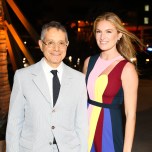 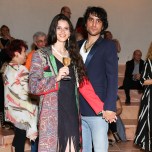 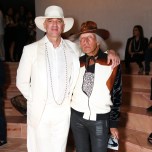 Mayor of Miami Beach Philip Levine nailed it when he compared Alan Faena to the Wizard of Oz. A well-dressed crowd huddled in the wind Monday night waiting for the Faena District’s co-owner to descend the circular staircase and cut the ribbon for Faena Forum (alas, the ribbon-cutting was done instead by his partner, Len Blavatnik).

Of his partnership with Faena, the billionaire said “a creative genius doesn’t exist without a business genius” — himself being the latter half of that equation.

Ximena Caminos, Faena’s wife and artistic director for his developments, commanded the lobby’s pink marble amphitheater in a Roland Mouret gold cape and matching platform boots, custom-made in France. Like a magpie, Love flocked over to chat with Caminos. The rocker had been at rehearsal for “Kansas City Choir Boy,” Todd Almond’s musical theater work at the Arsht Center.

“It’s the perfect situation. I can sleep all day, do my musical and go out all night — if I want to,” said Love, who’s known for epic shopping sprees at the Webster. “My whole per diem is going there.”

Ratner and his fiancée Elizabeth Whitson, a model-actress turned jewelry designer (according to Love, her pieces have a hint of Halston), were also in his hometown to fête his Hilhaven Lodge auction with Paddle8 to benefit the Simon Wiesenthal Center and the Museum of Tolerance. Its 100 pieces of Hollywood memorabilia represent a smidgen of his collection, which he estimates at 20,000 works.

Shigematsu and choreographer Pam Tanowitz’s commissioned work, “Once With Me, Once Without Me,” inaugurated the all-white domed theater-in-the-round upstairs. Miami City Ballet students danced in Sybilla Sorondo Myelzwinska’s costumes to Dan Siegler’s music. The stage’s cutouts for seating gave new meaning to the art of performance as the audience watched each other as much as the dancers.

It’s just the beginning for the convertible space, where Madonna and Chris Rock will perform Friday for 1,000 people.

“We simulated 20 types of events,” said Shigematsu, who noted he is eager for fashion shows. “I’d love to see an emerging designer, especially a Latin American, because this place is about the new.”