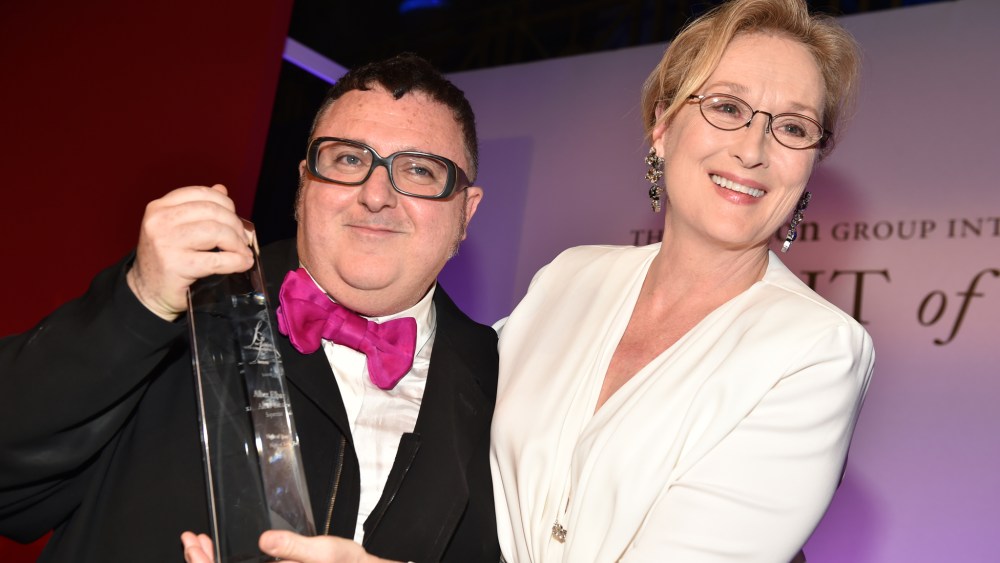 “I said, ‘I need more time.’ And I think everybody in fashion these days needs just a little more time,” the designer said after picking up his Superstar award from Meryl Streep.

“I was asked the other day, if I have a personal Instagram [account]. I said, ‘Not really’ and they said, ‘How come?’ I said, ‘I don’t really have photogenic friends; I only have good friends. I also do not take photos of the food. I eat food,'” he said. “But I’m addicted to Instagram and I love it. And I just met Kevin, the founder of Instagram. And I loved him for being so smart — not just smart, but humble. That’s a nice combination.”

With shoppers in Lanvin’s Paris store increasingly more inclined to snap a selfie and then critique their look, than actually look at themselves in the boutique’s mirrors, Elbaz said, “If that’s the case, and we will not have mirrors in the world, who will tell us the truth?”

And he called out editors for a different kind of distance. “The fashionistas are very, very busy filming. When I came out after the show, I felt there was no clapping. I said, ‘What’s going?’ on and they said, ‘They’re filming. They don’t have two hands [to clap.]’ My friend Ronnie Newhouse suggested creating an app for filming, for Instagram and for clapping.”

Echoing comments he has made in the past, Elbaz was on a roll. “We designers started as couturiers with dreams, with intuitions and with feelings. We started with,’What do women want? What do women need? What can I do for women to make their lives better and easier? How can I make a woman more beautiful?’ That is what we used to do,” he said. “Then we became creative directors, so we have to create, but mostly direct. And now we have to become image-makers, making sure it looks good in the pictures. The screen has to scream baby — that’s the rule. And loudness is the new thing. Loudness is the new cool, and not only in fashion. I prefer whispering. I think it goes deeper and lasts longer.”

Retailers have their own struggles. “They don’t have time to go be in the stores to meet the people on the floor. They are traveling and more traveling, going from one show to another and looking at the numbers, and open-to-buy. I say, ‘Look at people because people make numbers,'” Elbaz said.

Elbaz’s comments were met with enthusiastic applause, as was Streep, who queued up the designer by quoting Robert Herrick, singing “Poetry in Motion” and admitting to the hazards of opening a can of cat food wearing a white Lanvin gown, as she had at home earlier. “I said to myself, ‘Please, not tonight,'” said Streep.

Elbaz wasn’t the only one lamenting fashion’s short attention span. Fashion Star honoree Anderson referred to fashion “moving at the speed of boredom,” and fellow winner Wu said, “I came into this industry passionately playing on eBay buying dolls, it’s a bit embarrassing and creepy, but anyway — whatever. Fashion’s too serious.”

However one defines it, fashion is serious business for eBay, which now sells a handbag every five seconds and a dress every 30, according to Parrish. Ditto for Pinterest, which is nearing 100 million users who speak 32 languages and pin 24 million fashion images each day. With 700 employees and growing, Sharp said, “Most of Pinterest was actually built on the Upper West Side in a coffee shop in a Whole Food’s — 97th and Columbus” while accepting the Technology Innovation Award.

Streep tried to play down her ties to fashion. “I admit I know very little about fashion. I don’t know how I got into that movie,” she said, referring to her role in “The Devil Wears Prada” and acting a bit coy. The truth is she got her degree at Vassar in costume design. “So I’m a real nightmare for every designer who works with me in movies because I have so many ideas,” said Streep (whose date for the night, daughter Louisa, is an IMG model).

Timberlake, the Lord & Taylor Fashion Oracle winner, could relate. When R&B singer Tori Kelly, who also models for his William Rast label, sang an acoustic version of his song “Suit & Tie,” Timberlake stood in front of the crowd filming her performance on his phone. Earlier in the night he riled up his table by passing around a bottle of his tequila Sauza 901, perhaps the liquid courage that later fueled him to say of learning of his award, “All I heard was ‘oracle.’ I’m a f—ing oracle?…or as our friend Kanye likes to call it, ‘Kanye.’ He knows I love him. He’s so sweet.”

During cocktails, Holmes spoke of a political oracle. “Fashion can be revolutionary. There is a lot to be done in the world — 2015 is an exciting time with Hillary [Clinton] getting ready to win this race. But there is still a lot of work to be done around the world and we all keep fighting the good fight.”