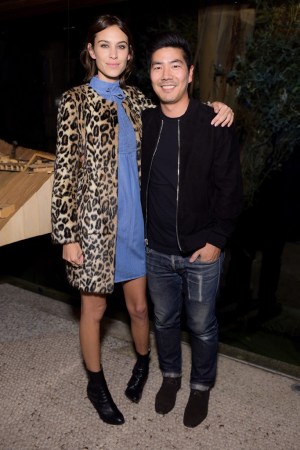 If there’s one thing an “It” girl can do, it’s keep momentum.

For the past two weeks, Alexa Chung — whose career is contingent on her “It” status, to the extent that she penned a book simply titled “It” — has been turning on the charm at a series of soirees and meet-and-greets with fans across the globe to promote her design collaboration with AG.

Luckily, she has friends in all ports. They all turned up to her previous bashes — Pearl Lowe in London, Leigh Lezark and Harley Viera-Newton in New York — and so she gathered her L.A. clique (Gia Coppola, Atlanta de Cadenet Taylor, etc.) on Thursday night to celebrate the West Coast leg of her tour. Next stop: a bash at Le Baron in Tokyo on Jan. 29.

“There are worse things to do,” Chung said, stretching her mile-long legs across a bed in the John Lautner-designed manse in Beverly Hills, the site for the party. “My liver might tell a different story but I’ve had fun. I’ll just pass AG the doctor’s bill when I need a new one.” AG, formerly known as AG Adriano Goldschmied, could, ostensibly, afford to cover the expense. After Coppola filmed a short film of Chung singing in a dark indigo minidress from her collection, fashion e-tailer Mytheresa.com sold out of that style, along with an A-line miniskirt, in 16 minutes.

Chung is winding down the peripatetic partying, clocking in nearly a week of me-time in L.A. before she heads off to the next marketing blitz in Japan. “Now that I’m over 30, I need to be realistic with my time,” she said, “and just pursue happiness rather than other stuff.”