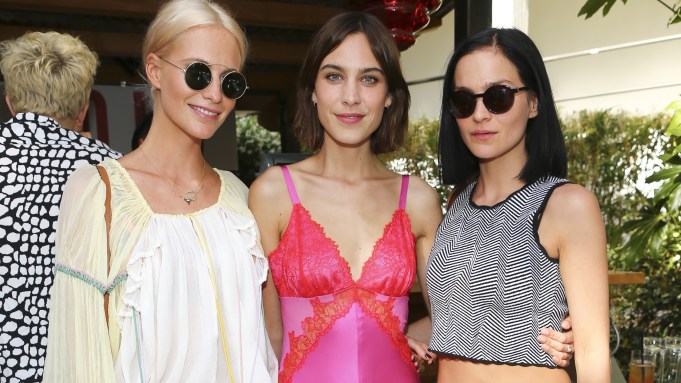 Hosting a garden tea party during cocktail hour at a hipster sanctuary like the Roosevelt Hotel in Hollywood is a formula for frivolous fun. Adding a hostess like Alexa Chung is a guarantee for whimsical clothes and stylish guests.

The perennial “It” girl welcomed her peers — including Poppy Delevingne, Kelly Osbourne, Leigh Lezark and Kilo Kish — to introduce her fashion app called Villoid on Thursday afternoon. In the spirit of working for a start-up, Chung threw herself into many of the tasks necessary for ensuring a memorable — and Instagrammable — party. After shopping for the paper flowers hanging above the garden, she handed over a flash drive packed with tunes by Otis Redding, Beastie Boys and The Velvet Underground to a guy tinkering with the sound system. She even encouraged guests to quaff the rosé wine, hauled into the party by the crateful to wash down the tea sandwiches and mini scones topped with cream and jam.

“She comes up with the creative ideas,” said Karin Kallman, chief marketing officer of the nine-person app maker that used to be known as Sobazaar. When the company tried to recruit Chung, it got an earful on what they were doing wrong. “She thought it was really ugly, the clothes were boring and she hated the name,” Kallman recalled. Since undergoing a Chung-approved makeover, the app has expanded from its base in Norway to 205 countries and tallied 350,000 downloads. Chung herself has more than 36,000 followers on the app. A hybrid of Pinterest, Twitter and e-commerce, it was recognized by Apple as the best new app in 95 countries, including the U.S. and U.K.

Chung also gave an “It” girl touch to her party outfit, pairing black Converse high-tops with a pink slip dress accented with red lace. “I bought it at Selfridges in the underwear department,” she said, pleading ignorance to the brand name. On her app, she knew exactly which styles she wanted to wear this summer. Pointing to $795 Sixties-inspired loafers adorned with interlocking G’s, she said, “Gucci is my dream right now. It just looks like everything I like.” Scrolling down on the screen to $2,290 shantung wide-leg pants by The Row, she said, “I want a white suit.”

In contrast, most of her guests dressed boho casual. Fresh from hosting a party with Shopbop at Coachella last weekend, Delevingne couldn’t relinquish her denim cutoffs. Lily Donaldson, also sporting short shorts, begged photographers not to take her picture.

Having fully recovered from spinning tunes at Jeremy Scott’s blow-out bash at Coachella, Lezark said she was trying her hand at another aspect of music-making: movie soundtracks. Along with her partner, Geordon Nicol, from The Misshapes, she created the score for “Time to Choose,” the documentary about climate change from Charles Ferguson, who won an Oscar four years ago for his last exposé, “Inside Job.”

Other photogenic guests who refused to coast through life on their looks included photographer Tasya van Ree, who is curating a show highlighting female artists with Petecia le Fawnhawk at Parachute Market, and designer Elle Sasson, who recently added bags to her ready-to-wear line.

Osbourne is in the middle of revamping her fashion line called Stories…By Kelly Osbourne. Even though she’s known Chung since they were teens breaking into the TV industry, Osbourne wouldn’t think of picking her friend’s brain for advice. “It’s the last thing we do when we get together,” Osbourne said. “We do not talk about work.”