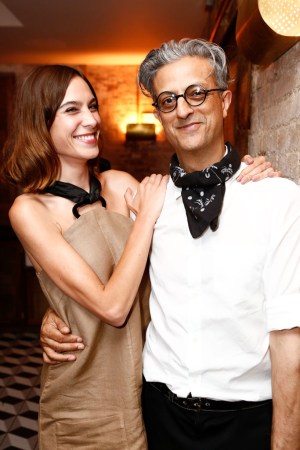 The French leather goods brand Longchamp, a tightly run ship still managed by the descendants of founder Jean Cassegrain, sold its 30 millionth Le Pliage bag in January 2014. The label is almost as ubiquitous as its face, Alexa Chung, who was being toasted on Tuesday night at 58 Gansevoort Street in New York City’s Meatpacking District.

It was the “It” girl’s fourth advertising campaign with the company and the umpteenth event to promote their relationship. This small dinner, though, in a hot, dimly lit event space above 9th Avenue was nothing like the blowout held in Tokyo a month earlier.

“That party was in a megaclub, and I can’t thoroughly describe it without sounding crazy,” Chung said, sitting primly on the edge of a couch, where, just a second ago, she was sprawled out looking exhausted.

While in Tokyo, Chung was surrounded by a squad of dancers moving under black lights. The New York dinner was a more low-key affair, consisting of some of her nearest and dearest — Atlanta de Cadenet Taylor, Tennessee Thomas, Mia Moretti — plus Waris Ahluwalia and The Strokes bassist Nikolai Fraiture.

Also milling about was photographer Max Vadukul, who’d spent two days in the Wynwood Arts District of Miami scouting locations when he came upon a building striped with colors that would become the backdrop for the Chung campaign.

At Tuesday’s dinner, a low hum of conversation settled over the small crowd to tunes by Afro Andes. Chung mulled the concept of collaborations with fashion brands, one of  her many “It” girl responsibilities. Though she’s also worked with AG Jeans on a capsule, Chung said she appreciates Longchamp’s mom-and-pop dynamic.

“I want creative input, not just quick turnaround. I think Longchamp respects that, though, and I appreciate that loyalty and discerning factor,” she said. “You think about how big the company is, — I mean, you see them everywhere, but it’s literally six people running the whole business. And we’ve gotten to know each other.”

Still, when asked about the possibility of collaborating in the future with Longchamp on a product, she admitted she is “kind of collab-ed out.”