The designer dispensed vodka shots to guests, and Skepta performed. 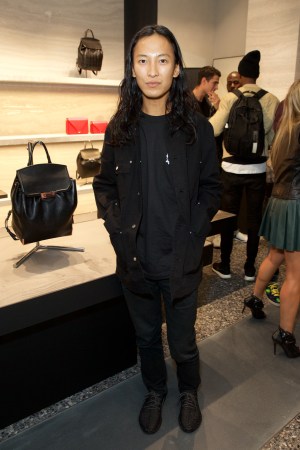 MIDNIGHT HOUR: Alexander Wang marked the opening of his first European store with a cocktail at his new Albemarle Street retail digs, followed by a raucous after-party at the frighteningly dark Rah Rah Room in Piccadilly Circus.

Ellie Goulding, in a sparkly red dress, was among the guests at the store, but didn’t appear to have moved to the Rah Rah Room, where rapper Skepta gave a surprise performance.

Wang said he chose him because “he knows how to get a party started.” If that’s true, then the designer certainly knows how to keep a party going.

Wang poured vodka shots down the throats of guests passing by his table in the club, and he admitted that all he did in Mykonos this summer was “ate, drank, got wasted.”

Nick Grimshaw had come straight from the Coach party at Selfridges where he’d deejayed a set with Mark Ronson. “I love playing at parties during fashion week because I can play what I like,” Grimshaw said. “I played Diana Ross, Grace Jones and some Rolling Stones.”

Other guests included Sadie Frost, Alice Dellal, Jack Guinness and Lily Allen, who was sitting alone on a sofa until she was whisked away by a minion to the heavily guarded VIP room.

Others could have used a bit of VIP treatment. “I’m so tired and it’s only Day One. I’ve got fashion foot,” complained Rita Ora’s stylist, Kyle De’volle, who was wearing Saint Laurent, which he referred to as “Yves Saint.”